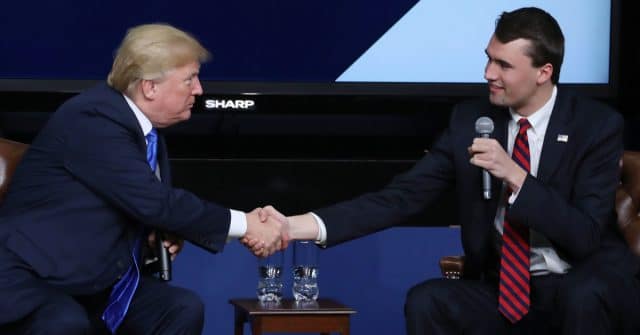 President Donald Trump has been credited with decriminalising same-sex relations in Botswana by the founder of a right-wing US organisation called Turning Point USA.

The ruling handed down on Tuesday in Botswana’s High Court was a landmark victory for African LGBT+ rights campaigners, who’ve been challenging the country’s colonial-era laws regarding same-sex relations for years.

But Kirk, 25, attributed the unanimous decision of the three High Court judges in Botswana to a May 31 tweet by Trump, which said he recognised the “outstanding contributions LGBT people have made to our great Nation.”

“Let us also stand in solidarity with the many LGBT people who live in dozens of countries worldwide that punish, imprison, or even execute individuals,” Trump tweeted, “on the basis of their sexual orientation. My Administration has launched a global campaign to decriminalise homosexuality and invite all nations to join us in this effort!”

In fact, the court decision on Tuesday was the result of a lawsuit filed in May 2018 by an anonymous gay man who argued the colonial laws violated his human rights.

“The victory in Botswana was achieved by incredibly brave Botswanans who put their lives on the line to fight for freedom,” said journalist Yashar Ali.

Turning Point USA is an organisation that focuses on training “students to promote the principles of freedom, free markets, and limited government.”

In the past, Turning Point has been accused of racism.

The Huffington Post reported in April 2018 that Crystal Clanton, the national field director for Turning Point, who left the organisation after sending messages that said, “I hate black people,” had been effectively replaced by a woman who said, “All I get is n****r dick.”

And the president of the Turning Point chapter at the University of Nevada was forced to leave the organisation in May 2019 after a video emerged showing him declaring, “white power,” while his friend shouted racist slurs.

This was not an isolated incident, with commentators saying that Turning Point has a “white supremacy problem.”

In the two weeks running up to his Pride month tweet, Trump had been sued twice over his plan to discriminate against LGBT+ families and his plan to to scale down discrimination protections in healthcare that puts LGBT+ people at risk; said he wants to install anti-gay Ken Cuccinelli to lead the US immigration system; proposed to eliminate transgender healthcare protections; and proposed new rules that would permit discrimination against homeless transgender people.