Home Gay Life Tyler the Creator raps about hooking up with “all the sweet men... 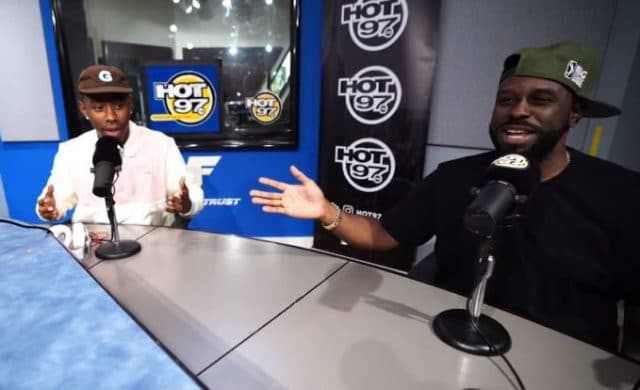 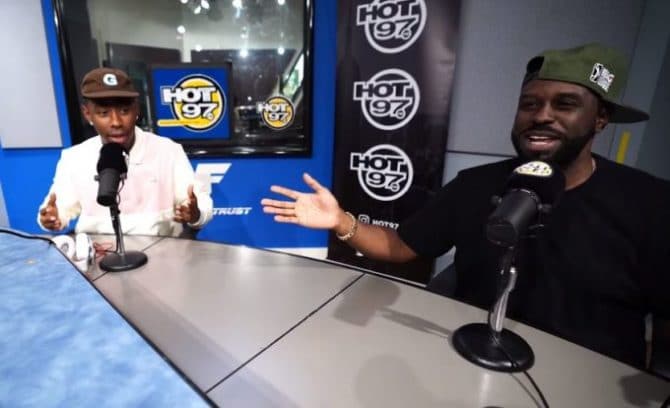 Tyler the Creator stopped by Funk Master Flex’s Hot 97 the other day where he participated in a freestyle segment that left his host unsure how to respond.

“I don’t have anything prepared,” Tyler said when Flex first asked if he wanted to do some freestyling during the almost two-hour broadcast.

He then proceeded to launch into a the gayest freestyle in the history of freestyles that included references to dating men, flirting with men, making out with men, hooking up with men, having wet dreams about R. Kelly, cruising on Grindr, and “butt sex.”

Tyler began with a reference to A$AP Rocky’s incarceration in Sweden, rapping, “Free Rakim, free Rakim, I might fly to Sweden to free him. Braid my wig, A$AP on my rib, Switch with him, then I can f*ck all the sweet men that I wanna. Actually I’m gonna, heat it up real quick, mothaf*cka I’m LeBron.”

“Listen Flex, we just met but I know it don’t seem like R. Kelly wet dreams I always keep 16. Me and Flex looking in the index for buff net n*gga, just for some hot butt sex n*gga.”

That’s when Flex tried put a stop to things. “What made you go with that verse?” he asked, uncomfortably.

Apparently, Tyler’s rap was getting a little too gay for him.

Undeterred, Tyler continued with his freestyle. Soon, he was rapping about being stood up by a guy who had to help his mom wash the dishes and turning to Grindr to find someone to “get right behind.”

“I don’t got much else to say so I’ma end this sh*t,” Tyler raps later, “because I got a lil date with this dude real quick. We probably going to go get some ice cream and do — oh, wait a minute he just got off his damn last shift, and he say that his momma can’t do the dishes, so he gotta go help her, so I’ma weep and look for someone on Yelp, but that’s not a dating app so what you use Tinder, Grindr, get with all ya n*ggas and get right behind em? What you gon’ do me like yo, DM and slide ‘em?”

Later, he went back to rapping about hooking up with Flex.

“Man, it’s weird as f*ck, I keep flirting with Flex and he ain’t trying to f*ck. Now I’m confused, I’ma leave. I just think that he hate me. I thought I came here so he’d date me. He talking ‘bout a freestye, eww n*gga, f*ck rap, f*ck that, I was trying to take him back and take off that hat and we can be like mwah, mwah, mwah on the lips,” Tyler said.

To which Flex replies by shouting, “Pause!”