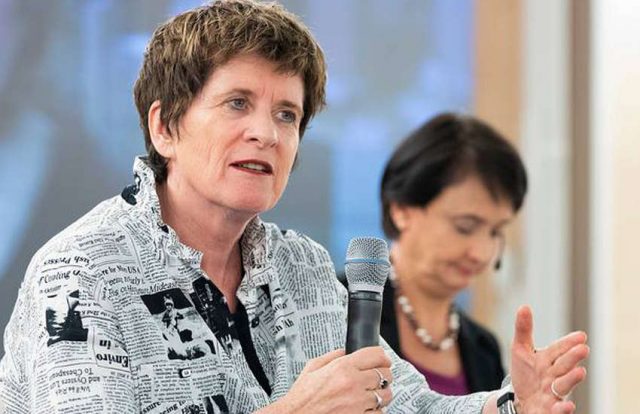 A top UN official has slammed the US’s attack on abortion rights.

The UN deputy high commissioner for human rights, Kate Gilmore, told the Guardian this week the attacks amounted to a ‘crisis’ of ‘extreme hate’ and ’torture’.

‘It’s clear it’s torture – it’s a deprivation of a right to health’ she said.

She said the UN has clearly stated that the absolute prohibition of abortion is against human rights.

Extremist conservative Christian groups are believed to be behind legislation in Georgia, Kentucky, Mississippi, Ohio, Missouri, Alabama, and Louisiana.

‘We have not called it out in the same way we have other forms of extremist hate, but this is gender-based violence against women, no question’ Gilmore said.

What’s more, Trump earlier this year peddled dangerous lies about abortions in the US. He accused Democrats of wanting to ‘execute babies after brith’.

Lawmakers in the US state of Louisiana last month approved an abortion law prohibiting procedures once a heartbeat is detectable.

Alabama governor Kay Ivey signed the in the nation on Tuesday night, making performing an abortion a felony in nearly all cases. Doctors would face up to 99 years in prison.

All those in favor of the bill were white male GOP members. All female senators opposed the proposal.

Opponents hope that the more conservative-led US Supreme Court will overturn the Roe vs Wade case.

The landmark ruling by the US Supreme Court in 1973 saw courts made abortions a constitutional right across the nation.

Undoubtedly, the attack on an American’s right to an.

GLAAD, the world’s largest LGBTI media organization, denounced the bills. ‘Limiting access to abortion is not just a women’s issue — it is an issue that affects us all,’ said Clare Kenny, Director of Youth Engagement for GLAAD.

A 2015 found these bisexual and lesbian women are almost twice as likely as straight-identifying women to get pregnant before the age of 20.