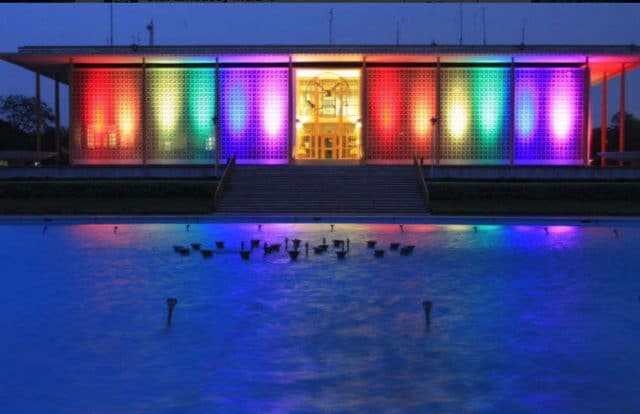 US embassies around the world are proudly raising rainbow flags outside their offices despite a ban by the Trump administration.

The US State Department has been rejecting embassy requests to hoist rainbow flags outside their buildings in host nations.

However, numerous reports are surfacing that show how some US diplomats have been finding ways to get around the ludicrous ban.

The facades of US embassies in Chennai, India, Vienna and Santiago have been displaying the flags, while the embassy in New Delhi is reportedly lit up in rainbow coloured lights.

In Santiago, Chile, the US embassy can clearly be seen displaying the rainbow colours on its building.

Eric Constantini tweeted a picture of the embassy, saying: ‘A little hard to see with the sun still up, but the US Embassy here in Santiago, Chile with rainbow lights. #pride’.

The Washington Post reported that one diplomat had told them: “This is a category one insurrection”.

Trump’s state department has rejected at least four requests from embassies to fly the rainbow flag during Pride month. These include requests from Brazil, Germany, Israel and Latvia, according to NBC News.

US embassies have showed their support for the LGBTI community by raising flags during Pride month for the last decade.

However, this simple act of solidarity now requires top-level approval from the State Department.

The flap over the flags started when the State Department did not send out an official cable this year with guidelines for marking Pride Month, as it has in years past, according to UK newspaper The Independent.