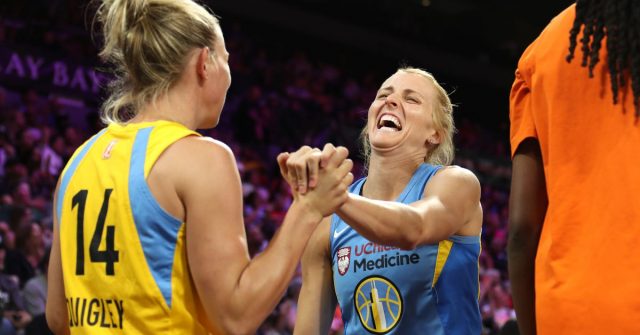 Among the reserves on the roster this afternoon in Las Vegas are Courtney Vandersloot and Allie Quigley of the Chicago Sky, two out teammates who quietly married in December.

They returned home to Seattle last month to celebrate six months since their wedding, as the Seattle Times reported, and two years since their engagement.

Sports Illustrated revealed it was June 2017 when Vandersloot and Quiqley — or “The Vanderquigs” as they call themselves — got together for a relaxing getaway in Zion, Mich.

“Vandersloot set up a projector to play a video montage, made a playlist, planned the route they’d take in her black Jeep. That night, with the car’s top down, the women took a drive to a nearby beach, where the video rolled and the music played and Vandersloot proposed with a vintage-inspired ring.”

Their romance was mostly kept on the downlow until two days after the wedding, when the couple shared the news on social media.

They’re not the WNBA’s only married couple. Last season, the Phoenix Mercury’s DeWanna Bonner and her former teammate, Candice Dupree of the Indiana Fever, played against each other for the first time since their 2016 wedding.

Vandersloot will be playing for team captain Elena Delle Donne and Quigley is on Team A’ja Wilson. The 10 players were selected by fans, current WNBA players and media.

“I’m lucky enough to play and travel with my wife,” Vandersloot told the Seattle Times. “It’s awesome. We compete. We get at it. We make each other better. I’m hard on her, but that’s how it’s been since the beginning. I credit a lot of my individual success to her.”

“I think [Courtney] has more emotion and she’s more competitive in the games,” Quigley told SI.com. “So sometimes she might just yell at me.” Vandersloot agrees: “I’m harder on her than anyone else.”

“My career really took off once we started dating and we started really committing to each other and the court,” said Vandersloot in her interview with her hometown paper. “Both of our careers took off. We owe each other a lot. We just want to continue to grow together both on and off the court. We happen to handle it well. But I wouldn’t recommend it.”

Tipoff is at 3:30 p.m. EDT at the Mandalay Bay Events Center in Las Vegas. The game will be televised live by ABC-TV.

You can watch an interview with Allie Quigley at 35 minutes into this report from the WNBA on Facebook.

Get a behind-the-scenes look at Team Wilson practicing at AT&T WNBA All-Star 2019 from Las Vegas!