Home Gay Life Virginia Mother Confronts KKK Members, Tells Them To “Get Out Of My... 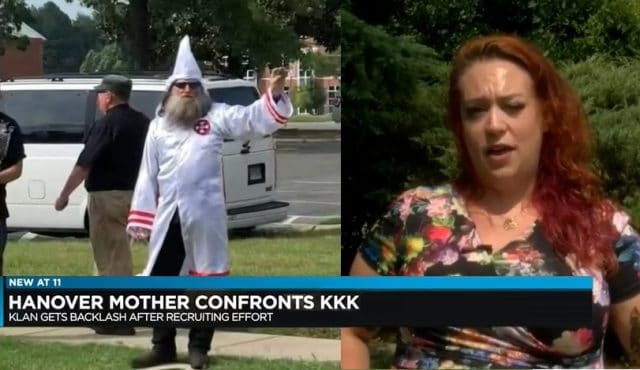 A Virginia mother recorded herself confronting a group of white-robed KKK members who were reportedly demonstrating outside the Hanover County courthouse on Saturday.

Shannon Spiggle, a mother of three, can be seen in the now-viral video yelling at the members of the Loyal White Knights from Pelham, North Carolina.

“You’re a disgrace to this country! Go home! Get out of my county!” Spiggle can be heard yelling.

“I was just getting so mad, but I was also shaking,” Spiggle, who confronted the group while rolling on Facebook live, told NBC12.

“I wasn’t exactly sure what I was going to do,” she said.

“Where it is their right to demonstrate, they have to deal with the consequences that they’re not welcome, not in my county, not where my children are growing up,” she added.

The KKK members reportedly encouraged people to call their hotline and passed out flyers during the weekend demonstration.

“I wanted them to know my presence. I wanted everyone to see that they were here… that you cant ignore it. You can’t look away,” Spiggle said, noting that she comes from a strong Jewish heritage.

“I’m the great great great granddaughter of America’s first reformed Rabbi,” said Spiggle. “They told me to go back to Israel, which I found to be funny because my ancestors came to the Americas in the 1620s. They helped build this country. My grandfather helped change Judaism.”

The Hanover County Sheriff’s Office said deputies were aware of the demonstration and that it took place without incident.