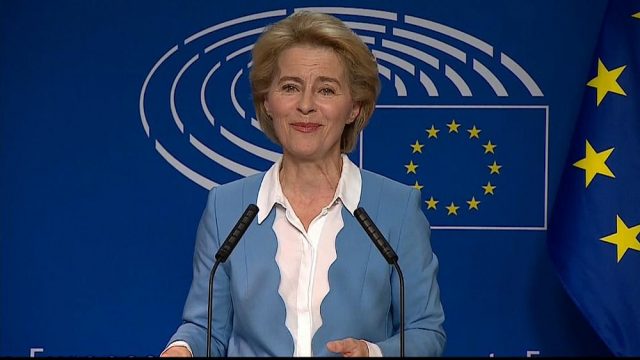 Ursula von der Leyen has been making her pitch in Brussels to convince MEPs to endorse her as the first female president of the European Commission.

The European Parliament will vote next Tuesday on whether the conservative German defence minister should be the one to succeed Jean-Claude Juncker. She will need the backing of an absolute majority of 376 votes in the 751-strong chamber to get the job.

Many MEPs have been critical of her surprise appointment last week by EU member states, saying the process was not transparent. They’ve voiced frustration that national leaders opted to nominate her rather than one of the lead candidates from the biggest political groupings in the new parliament after May’s European elections.

As part of her pitch, von der Leyen promised a gender-equal commission and said she wants Europe to be the first “climate-neutral” continent.

“We’ve heard the voice of the people, especially the young people. They want action for the future of our planet. We will have to be more ambitious because we are running out of time. CO2 has to have a price,” she told reporters in Brussels.

“If we want to set global standards, we have to move fast, we have to be more ambitious about the 2030 goals because climate neutrality by 2050 is a must.”

Von der Leyen, a 60-year-old former gynaecologist and mother of seven, switched between English, French and German as she spoke in favour of enlarging the eurozone and the EU’s open-border Schengen area, provided countries meet the criteria.

She promised to be tougher on the rule of law than the outgoing Commission and to reform the EU’s much-criticised asylum system. On Brexit, she said she hoped Britain would remain in the EU, calling for good future cooperation between the bloc and London.

The Commission is a pivotal EU institution with a wide range of functions that include proposing laws, policing member states’ budgets, and negotiating trade deals around the world.

Von der Leyen has been particularly active in courting the votes of Socialists, Liberals and Greens to back her nomination. She said Dutch Socialist Frans Timmermans would be her first deputy, along with Danish liberal Margrethe Vestager, who’s currently the EU’s competition chief.