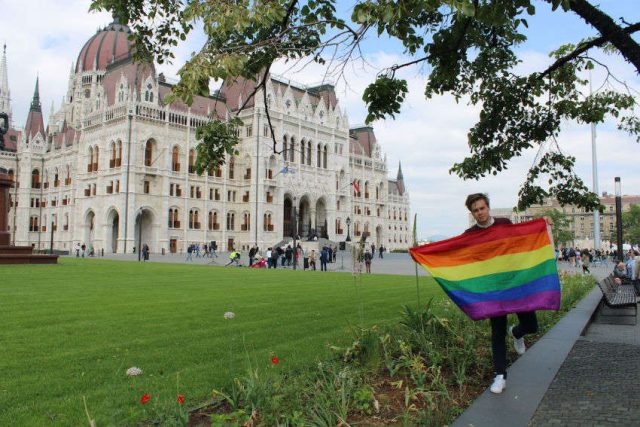 We have come a long way since our fellow heroes at Stonewall stood up against  the New York police.

Most of us might have the feeling that it got better. But for many LGBT people around the world, it is not getting better. For the first time since its existence, European LGBTI rights is backsliding.

As the LGBTI community, we need to understand our accomplishments can be reversed. History teaches us that any movement can be stopped.

Therefore, I think it is time to be more bond in defending our freedoms.

That’s why I, as an expert in LGBTi in international relations, have come up with five demands. World leaders must listen.

Decision-makers must not to close their eyes when they meet. Don’t make deals with homophobic and transphobic governments across the world.

If President Trump is making arms deals with Saudi Arabia, he is giving legitimacy to a regime that hangs people for being gay.

It is thoughtless to give away all our most private information to companies. The recent decision of the Committee on Foreign Investment in the United States to force a Chinese company to sell their stake in Grindr is not a bad one.

In recent years, more stories have come out of governmental suppression of any LGBTI movement. We can’t allow our opposition to get access to our information.

Understand the most basic values of our society are also inherently linked to what the LGBTI community demands.

Poland’s conservative government reformed the judiciary last year. Since then there’s much more political power over the courts. A few weeks ago, a Polish LGBTI activist was detained after spreading a picture of the Virgin Mary with a rainbow halo. She will be persecuted on the grounds of ‘offending religious sentiment’. This kind of political imprisonment is something you couldn’t imagine before the right wing-conservatives took over the power in Poland.

Support fellow LGBT+ people running for office. Just like men shouldn’t decide on women’s rights, straight people should also not solely decide on LGBTI issues. In all countries that have introduced LGBTI rights, it was not politicians that did it. It was the LGBTI community that advocated for several decades for those laws.

Homophobic governments want to prevent us to be open about ourselves.

In 2013, Russia introduced an anti-propaganda law exactly for that reason. With this law, walking hand in hand with your boyfriend or girlfriend on the street can be perceived as a political act and can be persecuted. The grey, heterosexual and masculine political elite does everything to prevent us from becoming more visible. They are afraid to lose their power.

Stonewall hero Marsha P. Johnson once said: ‘History isn’t something you look back at and say it was inevitable’.

Let us not focus on the past. But start writing our own history – today!

Rémy Bonny is a political scientist and LGBT+ activist from Belgium. He is also a specialist in the LGBTI movement in international relations – specifically in Eastern Europe and Central Asia. On 28 June, he is also going to be one of the speakers at the Commemoration of the 50th Anniversary of the Stonewall Rally in New York City.

Stonewall 50 Voices: I was at Stonewall and have seen it whitewashed