Home Gay Life Will this be the biggest LGBTQ party in the history of the... 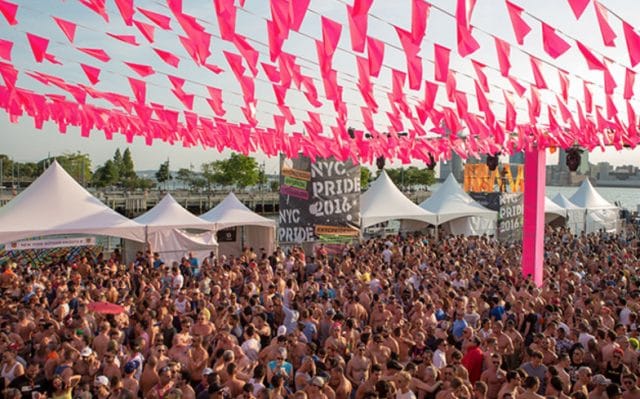 New York City is the birthplace of the global Pride movement and spiritual home of gays everywhere… all thanks to some trouble in some gay bars. As we gear up to the mother of all Prides – World Pride, with Madonna and everything! – we check out what the LGBTQs get up to in modern-day NYC.

A spur-of-the-moment Vogue-ing ball has just broken out among some gay boys too young to know the history they are trampling, and little do we realise that it’s all going to end in a conga round the bar to something by Gloria Estefan. So far, so gay. So New York, the city that never sleeps but sometimes passes out drunk on the bed.

Bearing in mind this is probably the first bona fide gay bar in the whole wide world, it’s great to see there’s still life at the location where they recently celebrated the 52nd anniversary of the Mattachine Society’s ‘Sip-In’, which happened right there at that long, brown bar where cocktails have been rested since the 1800s. 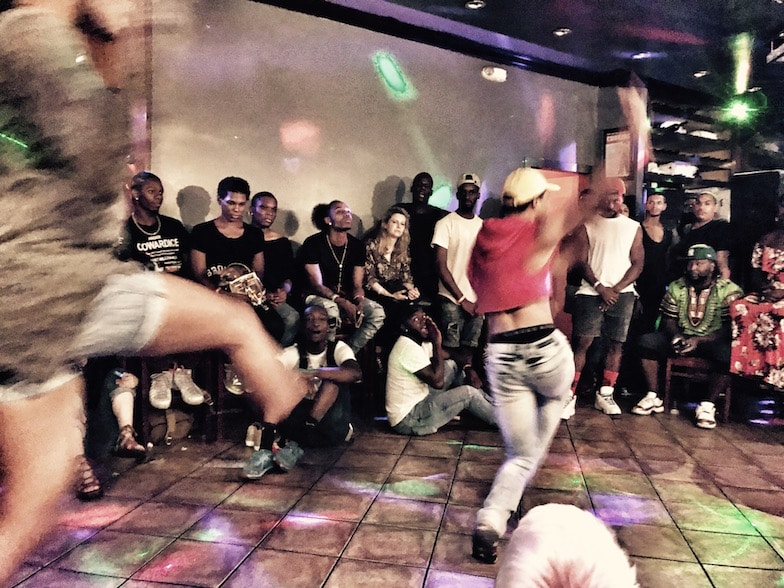 The Mattachine Society was the respectable face of gay liberation back in the late 50s and early 60s and the ‘Sip-In’ was a non-violent, alcohol-based act of civil disobedience – albeit carried out in smart jackets and ties – against regulations prohibiting the sale of booze to openly gay men, who were considered ‘disorderly’, just by being gay. Even before a drink!

Located on the intersection of West 10th Street and Waverly Place – or is it the other way round? – Julius’ still has the real affection of gays in the know. Back in the day it was all Tennessee Williams, Rudolph Nureyev and Truman Capote, but even now John Cameron Mitchell, the director of Hedwig and the Angry Inch and Shortbus, hosts regular parties to celebrate those homosexuals who demanded their right to be served cocktails in an act of defiance that eventually changed the law.

At the other end of the spectrum, and much more celebrated, were the Stonewall Riots, an example of gloriously bad behaviour, where many of the protesters were wearing high heels rather than jackets, tube dresses instead of ties. The Stonewall Inn, you may remember, was the bar where, one night in 1969, the gay and trans punters started an ongoing riot when one too many police vans arrived to arrest them for simply having that drink and a little light dancing.

The Stonewall Inn is serving cocktails to ‘disorderly’ gays to this day and even though it may have seen better times, we still need to support it. And Monster and The Duplex, where off-Broadway stars will often drop in for some piano action. Both have been knocking around since the days when Greenwich Village was the area of choice for hippies and gays and other self-identified outsiders.

New York is the undisputed birthplace of the Pride movement and though the gay centre of gravity shifts around the city from time to time – from Chelsea to Hell’s Kitchen to Brooklyn and back – the heart is still in The Village. The first Pride march was held in 1970, the year after the Stonewall Riots, and still starts on Christopher Street, the site of the Inn before veering up 5th Avenue.

For African Americans, church is sacred not only because of the religious thing but because it was the only place they were allowed to gather and exchange experiences. For the gay community, our churches are our bars and clubs. The places we could congregate, our safe spaces and a reflection of where we were on our journey from outlaws to in-laws (not always a straight line, that journey).

In New York it went from the all-gay, all-male, all-sex-and-drugs, all-the-time post-liberation 70s at The Hellfire or Paradise Garage to the more mixed hedonism of Palladium and Studio 54, perhaps the birthplace of diversity. Then there was the edgy creativity of Club USA and Jackie 60 in the 90s to the raw Lower East Side bars like The Cock and The Slide, where retro-go-go dancers would dance on the bars for tips.

Various mayors may have tried to close the whole thing down – with remarkable success thanks to an ancient no-dancing Cabaret law, which is being fought as we speak! – but now there is an Ambassador for Nightlife who New Yorkers are hoping will return the city to its decadent disco heyday. And with the likes of Susanne Bartsch, still putting on the most colourful parties in the world – the latest Bartschland Follies took place mid-May at The McKittrick Hotel – there’s plenty to revive.

It may sound like a bit of an alibi, but if you’re really interested in gay New York, maybe take in the recently created New York City AIDS Memorial and the cool little NYC LGBT Center, with its Keith Haring pissoir, then have a nap because the real gay New York is at church, in its bars and clubs.

WHERE TO STAY/WHERE TO PLAY

Up in mid-town, just over from the likes of the Museum of Modern Art and down from upscale arts district The Lincoln Center, is Hell’s Kitchen, the formerly no-go area where the gang violence of West Side Story was set. Now, like so many areas where no one else wanted to live, it’s gay party town.

Ink48
This former printing house, hence the name, lures you with a slinky-shiny lobby, then it’s up to your loft-like room which is almost surprising in its breezy simplicity. But it’s way up there, on the 16th floor, where Ink48 likes to save its showstopper for cocktail time – The Press Lounge, which is where you get all your ‘wows’ with those sprawling views of movie-Manhattan from one of the most impressive rooftops in town.
653 11th Avenue
ink48.com 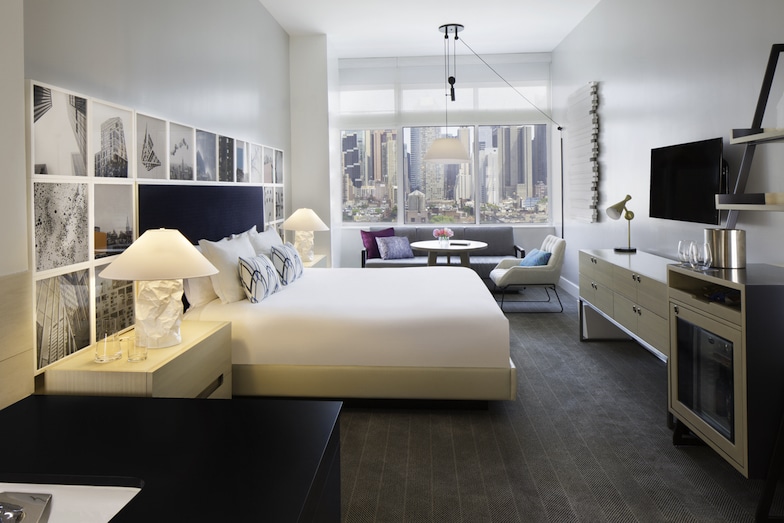 Flaming Saddles Saloon, a Western gay bar where the hotties serving drinks will occasionally hop on up, Coyote Ugly-style, to deliver a line-dance. It’s frightening when it first happens.
793 9th Avenue
flamingsaddles.com

9th Avenue Saloon is old-school for lovers of old-school, a bar that could be somewhere much less cool than here but which serves strong gin to a grown-up crowd who don’t always act that grown up. Could do with a lick of something.
656 9th Avenue

Industry is big and bold and bare-chested a lot of the time with different levels, plenty of entertainment along drag-queen lines and is the sister bar to Chelsea’s famous Barracuda. Just some of the reasons you may want to go.
355 W 52nd Street
industry-bar.com

Another practically no-go neighbourhood that’s become an altogether muckier and murkier – but no less fun! – gay scene with the emphasis on creativity, decadence and grit.

SIXTY LES
Contemporary design, delicious interiors and rooms that eat up those Uptown views, SIXTY LES is the classiest address in one of the buzziest patches of Manhattan. Make Believe – their whimsical, sky-high social club which is just forcing you to dream – is open to the early hours for kicking-back duties, and you’ll just die for the rooftop pool where Andy Warhol’s face stares back at you and long, tall cocktails are served to guests-only on demand.

Phoenix likes to think it’s raised its game from ‘go-to dive’ to ‘be-seen-at destination’ but what’s the difference? Maybe it’s just a ‘be-seen-at dive’, whether you want to watch RuPaul’s Drag Race in company or party on down at the weekend.
447 E 13th Street
phoenixbarnyc.com

Back in the heyday of Sex and the City, Brooklyn was the place you got banished to if you had a child. Now it’s the buzzingest neighbourhood in town and people look on you with slight pity if you are still based in Manhattan. 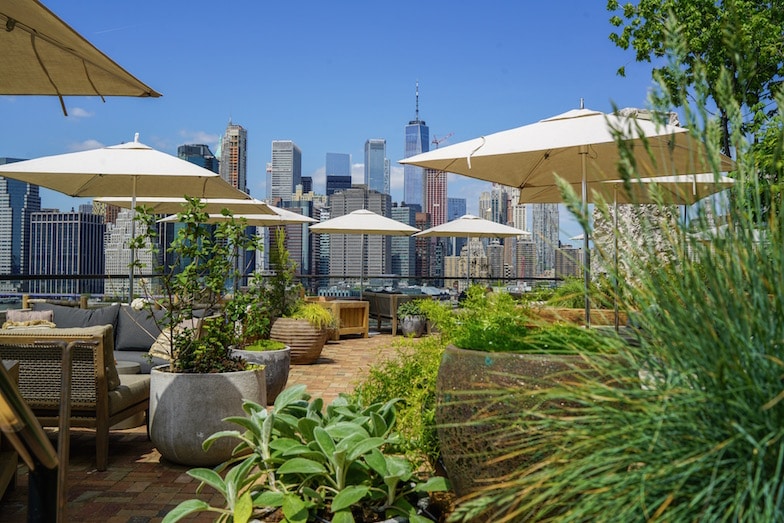 House of Yes reckons it has ‘created this space as a temple of expression dedicated to connection’, but don’t let that sort of bollocks put you off as, on the right night, it can be a spectacular laugh. Even the Deepbeats Vinyassa Flow.
2 Wyckoff Avenue
houseofyes.org

Bizarre Bar promises ‘assorted madness and the unexpected’ plus a regular four-hour happy hour, which seems like a good combination to us. Big gay brunches, an old-school atmos and shows, shows, shows.
12 Jefferson Street
bizarrebushwick.com

From the hard-core pre-AIDS gay sex in dirty meat trucks over by the piers in what is now the very smart Meat Packing District to the muscleboys on rollerblades fuelled by egg-white omelettes, Chelsea still clings on as one of the major gay neighbourhoods of NYC.

The Standard, High Line
Over in Meatpacking and with pinch-yourself views over the Hudson on one side and that concrete jungle of yore on the other, The Standard’s Chelsea outpost sores above what is undoubtedly Downtown’s favourite public park (The High Line, keep up!) The rooms are classic André Balazs loveliness, where floor-to-ceiling windows allow the views to skip the light fantastic with retro-modernist interiors. The party animals among you will love Le Bain, the penthouse disco with its rotary of starry regulars.
848 Washington Street

REBAR Chelsea is frankly never going to win any awards for pushing envelopes but if you want a busy, buzzy, straight-down-the-line venue that still knows how to put on quite a party with a variety of different nights, then it’s your man. Or non-gender-specific person.
225 W 19th Street
rebarchelsea.com

Boxers is a sports bar. Yes, that’s right, a bar where people go to watch sports, just like the straight folk do. Only here in this hugely popular no-frills joint with its pool tables, flat-screen TVs, outside terraces, pizza and lots of beer, you’re just as likely to be watching RuPaul’s Drag Race as anything with balls. There’s another one in Hell’s Kitchen.
37 W 20th Street
boxersnyc.com

The Eagle is a sort of global gay brand whose brand values are older, fetishy, down ‘n’ dirty, you know the sort of thing. Never afraid of a beer blast, this is a gay NYC institution but a little intimidating to walk into. Check what’s on each night so you’re appropriately attired.
554 W 28th Street
eagle-ny.com