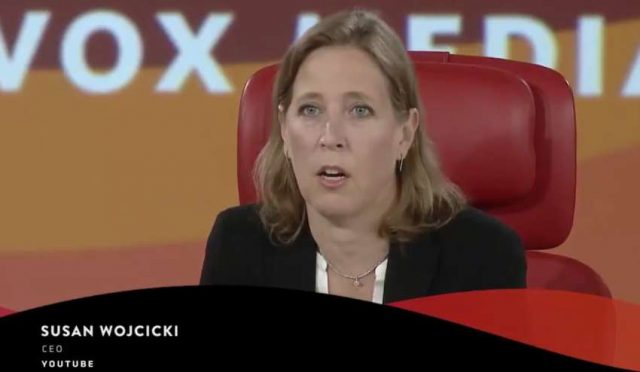 YouTube’s CEO has apologized to the LGBTI community, but stood by its decision to keep a creator accused of homophobia on the platform.

The video site, which currently sports a Pride flag-themed display picture on its Twitter account, came under fire for its lack of drive in defending LGBTI people.

At a Q&A session at Code Con, an annual conference in San Francisco, California, for software hackers and technology enthusiasts, Axios reporter Ina Fried asked YouTube CEO Susan Wojcicki whether she felt the company made the right call.

Wojcicki said she was ‘personally very sorry’ to the LGBTI community, and that the decision was ultimately an emotional one for management.

‘YouTube has always been a home for so many LGBTQ creators and that’s why it was so emotional, and though it was a hard decision, it was made harder that it came from us because we’ve been such an important home,’ she said.

In addition, Code Con is organized by Vox, the same website that Maza himself writes for.

However, she insisted that despite criticism, YouTube will not cut ties with Crowder. Furthermore, the company will continue to stand by its call, and argued the case of consistency.

‘It’s just from a [harassment] policy standpoint we need to be consistent.

‘Because if we took down that content, there would be so much other content that we need to take down.

‘We don’t want just to be knee-jerk, we need to think about it in a very thoughtful way.’

But in a winding twitter thread, Maza complied multiple clips of Crowder where the host attacked Maza as a ‘gay Mexican,’ ‘lispy queer,’ and a ‘token Vox gay atheist sprite.’

They said that as the website is an ‘open platform,’ Crowder’s comments did not ‘violate’ their policies.

Moreover, a Google spokesperson told Gay Star News the call came as ‘Crowder [had] not instructed his viewers to harass Maza on YouTube or any other platform.’

Although, moderators did take some action against Crowder as a result of the investigation by demonetizing his channel. Thereby, preventing the creator from making money from ads ran on his content.

But after Wojcicki’s words, Maza slammed the platform.

He tweeted: ‘If you don’t regulate hate speech and harassment, you haven’t actually created a “home” for queer people.

‘You’ve created a place where queer people have to pay an extra price – tolerating abuse – just to speak up.’