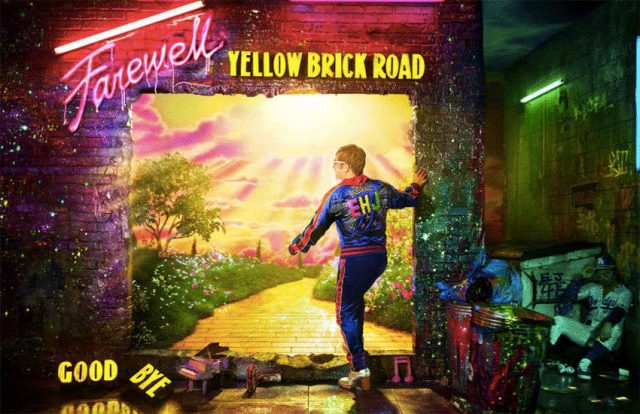 In Atlanta, London, Windsor, Nice and Venice, according to the Telegraph. And there’s this one in LA.

Elts has, of course, been a close confidant of everyone from the Spice Girls to Lady Gaga to Kelly Osbourne. He’s also known for his friendship with Ed Sheeran, whose manager formally worked with Elton’s management company, Rocket Entertainment.

Of course, the Rocketman’s 2001 Grammys duet with Eminem – known for his homophobic lyrics – prompted a lot of controversy. However, the pair remain firm friends.

Speaking on the Graham Norton Show in 2017, Elton even revealed the present the Stan rapper sent him for his civil partnership to David Furnish: ‘It shows you how homophobic he isn’t — we had two diamond-encrusted cock rings on velvet cushion.’

As detailed in the opening of the new Taron Egerton-starring rock biopic Rocketman (read our review here), Elton struggled with addictions to drugs and alcohol at the height of his fame – as well as sex and shopping, while also suffering from bulimia – before entering rehab and taking a different road. ‘I still dream, twice a week at least, that I’ve taken cocaine and I have it up my nose,’ he told NPR in 2012. ‘It’s very vivid and it’s very upsetting, but at least it’s a wake-up call.’

Elton and David have two sons: Zachary, 8 and Elijah, 6. The dads have been instilling them with charitable values from the beginning. ‘They get £3 pocket money, but £1 is for charity, £1 is for saving and £1 is for spending, they get three coins and put them in separate jars,’ he told The Guardian in 2016.

Perhaps Elton’s most impressive achievement is his tireless work to raise awareness of HIV and AIDS. Elton has said he set up the foundation after meeting Ryan White, an American teenager who was banned from school in the 80s after being diagnosed with AIDS.

Elton told Personal Health News that Ryan and his mother ‘quite literally saved my life. Losing Ryan on April 8, 1990, and watching Jeanne and Andrea deal with their grief with such profound grace and humility motivated me to finally take control of my life, get sober, and find new purpose in my determination to honour Ryan’s extraordinary legacy’.

In 1992, that new purpose turned out to be the Elton John AIDS Foundation.

When Elton publicly claimed he’d spoken to the Russian leader on the phone to ask for a meeting to discuss LGBTI rights, it turned out to be a prankster. The ensuing media attention prompted Putin to call him, and while a meeting was mooted, it never came to be. Elton did, however, meet with senior Russian ministers to press them on the issue in 2018.

Awoken by a storm, he reportedly once demanded his management do something about the weather, publicly slammed Madonna at the 2004 Q Awards for her miming (‘that’s me off her Christmas card list, but do I give a toss?’) and called photographers ‘rude, vile pigs’ the same year. His wobbly temper was famously captured in the 1997 documentary Tantrums and Tiaras, directed by his husband David [pictured above].

He told The Guardian in 2012: ‘I went to Russia in 1979 and I knew we were being watched all the time: I had an interpreter that they’d clearly set up. Actually, I ended up having sex with him on the roof of my hotel.’

His total sales are in the region of 300 million. Goodbye Yellow Brick Road, which was released in 1973 and sold 30 million, is considered his magnum opus.

The moving ballad Candle in the Wind was originally released in 1974 as a tribute to Marilyn Monroe. It was re-released 24 years later as a tribute to Elton’s close friend Princess Diana, with proceeds going to the various charities she supported. It has sold over 33 million copies worldwide; only Bill Crosby’s White Christmas has sold more.

His homes are or have been adorned with pieces by Keith Haring, David Hockney, Andy Warhol, Henry Scott Tuke plus photographers Robert Mapplethorpe and David LaChapelle.

From Your Song to Rocketman, the words to most of Elton’s biggest hits are the brainchild of Elton’s longtime songwriting partner Bernie Taupin. The guys have worked together for over 50 years and according to Elton ‘I’ve never had an argument with him in my life.’ Bernie’s also written for Olivia Newton-John, Rod Stewart and even the Red Hot Chill Peppers!

He is a prolific tourer – this month he is playing 14 shows on his Farewell Yellow Brick Road tour all over Europe, while also promoting Rocketman. He has played at least 3,000 live shows in 75 countries across 40 tours and 1970!