The LGBT community is wide and spread, and Hollywood doesn’t lack LGBT actors. You may not know that some of them are gay, or you may not know about their roles in superhero TV shows, but here they are.

These actors are gay and they rock the world of TV series!

Wentworth Miller has recently come out as gay, and most of us knew him from Prison Break. But the actor is having a major role in a comic book series as well. Miller plays a supervillain on CW’s The Flash and will feature in Legends of Tomorrow, and spin-off of The Flash and Arrow.

What he thinks about Hollywood attitude towards LGBT actors?

“I’d like to believe the industry is more LGBT-friendly,” openly gay actor Wentworth Miller, who portrays Captain Cold on CW’s The Flash, told TheWrap, “I see LGBT characters on TV and I can think of actors who are out and paying the rent. Again, mostly on TV. Most out actors I can name are either exclusively or primarily associated with television. I don’t know why that is, why I can’t think of more out movie actors. It feels like change might be coming more slowly on the feature side.”

Colton Haynes has just confirmed that he’s gay, as there were question marks above his head. He played Arrow’s sidekick in The CW’s Arrow. However he departed in 2015, maybe because he needed a break.

After recently coming out as gay, Haynes hopes that 2016 will be better.

Andy Mientus – the Pied Piper in The Flash

Mientus talked about the way a part of the audience could feel more integrated if gay characters/actors are more exposed on TV.

“It makes sense a comic book fan base would be more open minded because a lot of these guys are different than the norm, too. I’m a huge video game nerd, so I feel like I can safely say what it feels like to be nerdy and to not be the cool kid and to seek community. Maybe, that’s where it comes from.”

“When we read comic books, we see people who are flawed and when we were younger people told us we were flawed, so we connected to those things… Those of us who love comics — whether we’re straight, gay, lesbian, transgender or whatever — those of us involved in it, we don’t judge,” he said in an interview.

Robin Lord Taylor portrays Oswald Cobblepot in Gotham, but he doesn’t like to label himself. That is why some of us must have not heard of him being gay.

“I feel like the landscape has totally changed. Regardless of sexual preference, it’s more that as a character actor, the less I reveal about myself, the better. My favorite actors are the ones I know least about.” 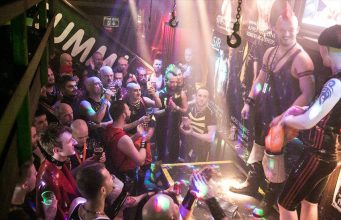 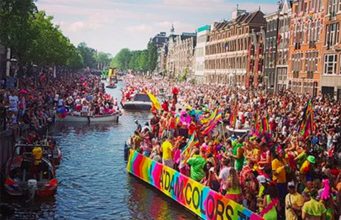 Take a look at the 25 best pictures from Amsterdam Pride, the only LGBTI parade on water