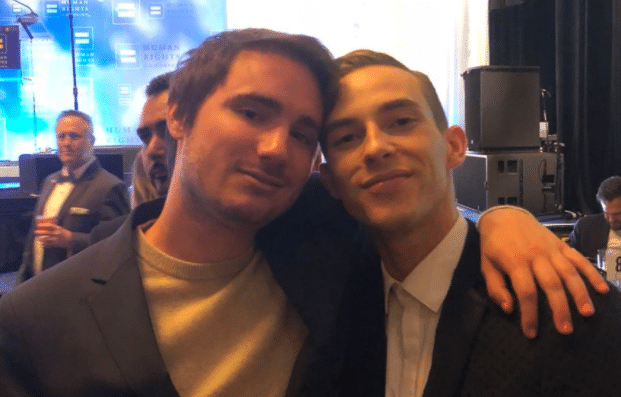 They’d so make a good-looking couple!

Adam Rippon and Sam Greisman, the son of US actress of Sally Field, have finally met!

Adam and Sam hit the headlines when Sally, who won the Best Actress Oscar for Norma Rae, tried to set them up.

The Lincoln star’s son shared screen grabs of texts between the two, in which Sally said: ‘Sam… he’s insanely pretty. Find a way.’ Sally then retweeted the exchange, tagging Adam.

Adam initially addressed the attempted set up by saying: ‘Sam, your mom — I admire her. And I’m sure one day we’re going to meet! So thanks, mom.’

Now, the pair have actually met – at the Human Rights Campaign Gala Dinner in New York City, no less. (And were loving Sam’s choice of nail polish for the occasion!).

Sam took to Twitter after the encounter (on Saturday 10 March 10) to share a photo of the pair, along with the message ‘Thanks, mom.’

What’s going to happen next?!

Already a star in his own right, Adam shot to international fame after winning a Bronze medal as part of the US figure skating team at the Winter Olympics.

Last week, he fearless fielded a question about using Grindr at the Games.