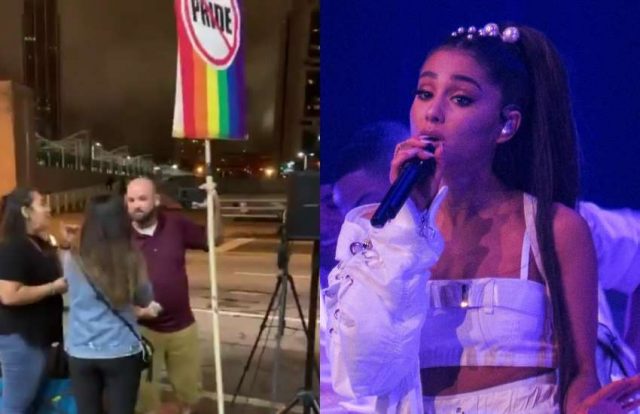 In a profanity-laden clip a fan shared on Twitter, a man holding a rainbow banner with the word Pride crossed out stood outside the venue.

The Thank U, Next singer later shared some loving words for her LGBTI fans at the sold-out performance at State Farm Arena.

On the 33rd date of her US run, a man holding an anti-LGBTI sign greeted fans lining-up for Grande’s concert.

A woman confronted the bearded and bald protester, wearing a burgundy polo and khaki shorts.

Furthermore, fans pointed out that June is Pride month and asked him: ‘What kind of Christianity is this?’

He replied: ‘God wants you to repent.’

In a , fans jeered at the man as he was escorted off the premises. Loudly chanting ‘goodbye,’ while another video showed a fan pouring a drink over the man’s head as he packs up his microphone.

One fan in the background danced on a podium as this went down.

, a fan had thrown the banner over a bridge, and ‘the speaker had been tipped over multiple times.

‘One of their headsets was taken out and tossed.’

Grande took to Twitter to sound out her thoughts of the protester. She told fans she was ‘so sorry’ that they ‘had to encounter this.’

However, she admitted she was ‘saddened but not surprised.’

‘Proud of u all for not fighting/engaging violently. Never worth it,’ the pop star tweeted/

‘He is highly outnumbered. You are all so celebrated and loved and safe.’

In addition, to the protester, she added: ‘Wishing hum peace and a healed heart cause girl, yikes.’