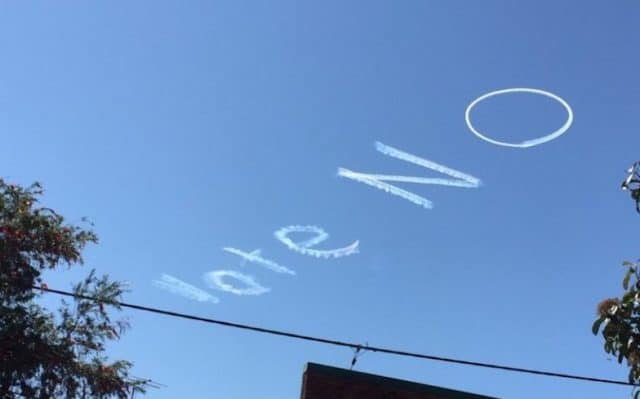 Opponents of same-sex marriage preached their hate to the skies on Sunday morning.

Just days after the start of Australia’s postal vote for same-sex marriage, anti-equal marriage campaigners have written “Vote No” across the skies of Sydney.

The message appeared above the city’s Inner West district on Sunday morning, encouraging Australians to vote against marriage equality.

Australian Conservative Senator Cory Bernardi told opponents of same-sex marriage to be “vigilant” during the Coalition for Marriage’s launch of the No campaign.

To an audience of over 1,000 people, the Senator said: “We are under assault because we are on the right side of legal and moral history. It is a sign of what is it come unless we are vigilant and can defeat this vote in the weeks ahead.

Senator Bernardi argued that freedom of speech would be affected by the postal vote: “Many of you know that I am a champion of freedom.

“If the state redefines marriage it also redefines how you can speak, think, advocate, and believe about marriage.”

Someone LITERALLY payed for sky writing to say "vote no" for marriage equality in Australia… I hate people pic.twitter.com/VsAygI7odW

I cannot believe that today, homophobic idiots felt the need to write 'vote no' in the sky. Get your shit together Australia.

Vote no sky writing appears in Australia on the day of the marriage equality vote? What is wrong with people and their fragile identities. pic.twitter.com/1T5VU04w02

Why would you go out of your way and pay lots to have a plane write 'vote no' to allowing gay marriage?! Australia is so behind #sayyes pic.twitter.com/aO1PdESHQg

Homophobia still exists. Someone went as far to hire a plane to write "vote no" to gay marriage in Australia ? pic.twitter.com/SlWCqKNGSN

The results of Australia’s postal vote isn’t binding, but it will give politicians a better idea of what the public wants when they perform a vote in parliament.

In a recent poll, 63% of Australians said they intend to vote in favour of same-sex marriage. However, LGBT+ activists have criticised the $122 million procedure, arguing it will give homophobes a platform to vote hate – which it already has.

Their statement read: “We support marriage equality and believe all Australians deserve the freedom to marry the person they love, and to have their relationships recognised with the same dignity and legal protections as their neighbours, friends, and family.”