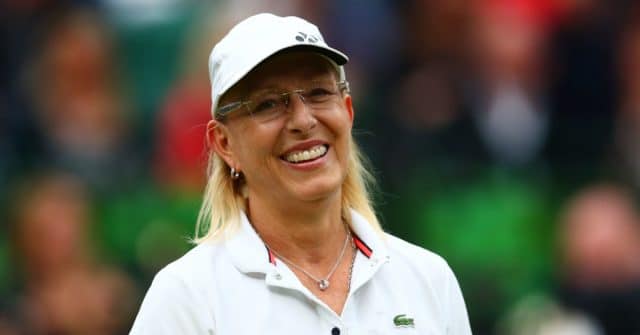 The BBC film will follow Navratilova as she meets a range of athletes, scientists and sporting officials to discuss trans inclusion.

“To put the argument at its most basic: a man can decide to be female, take hormones if required by whatever sporting organisation is concerned, win everything in sight and perhaps earn a small fortune, and then reverse his decision and go back to making babies if he so desires,” she wrote in a Sunday Times column on February 17.

Navratilova hopes that the documentary—which will air in late June–”enables everybody to be more knowledgeable about the overall transgender and sport debate and hopefully brings us closer to a solution that makes as many people as possible happy.”

During the film, Navratilova meets Joanna Harper, a trans runner and medical physicist who advises the International Olympic Committee on gender.

It also features contributions from Sharron Davies, the former swimmer who in March called for the exclusion of trans athletes from women’s sports.

Doubling down on her rhetoric, Davies suggested in May that events could be divided by chromosomes rather than gender.

“Maybe we have an XX female category and then a category for men and XY. We want sport to be inclusive and perhaps the way to do this is based on biology,” she continued in her Daily Mail article.

Clarifying that trans athletes have been permitted to compete in the Olympics since 2003, Pride Sports, LEAP Sports Scotland and LGBT Sport Cymru clarified: “Trans women athletes have to comply with some rigorous qualification criteria in order to compete, and to date, as far as we are aware, not a single transgender athlete has medalled at the Olympics.

“Surely this alone would suggest that the IOC’s transgender policy is having the desired effect of ensuring fairness in gender categories.”