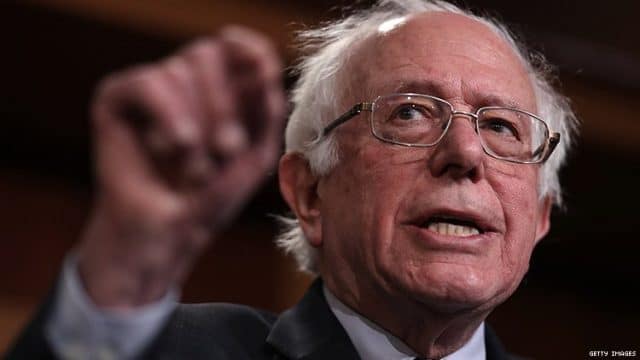 Long-rumored 2020 hopeful Bernie Sanders finally came out with it: He’s running for president.

The Vermont Senator announced his campaign, his second consecutive attempt at seeking the Democratic nomination, in a Vermont Public Radio interview Tuesday morning. He detailed a platform similar to the one he campaigned on against eventual 2016 Democratic nominee Hillary Clinton, focused on expanding health care coverage, raising the minimum wage, and lowering student debt.

Along with defeating current President Donald Trump — whom Sanders described as “a pathological liar, a fraud, a racist, a sexist, a xenophobe and someone who is undermining American democracy as he leads us in an authoritarian direction” — the Vermont Senator said that he wants to extend Social Security by raising payroll and estate taxes on the wealthy.

“Our campaign is about transforming our country and creating a government based on the principles of economic, social, racial, and environmental justice,” said Sanders in video announcement uploaded to YouTube following the VPR interview. “Together, we can defeat Donald Trump and repair the damage he has done to our country.”

Sanders has a generally strong record on LGBTQ+ rights — though he did vote for FOSTA-SESTA, the bill package intended to curb online sex trafficking, which has further marginalized sex workers, a labor class that is disproportionately queer and trans. As the Mayor of Burlington, he approved a 1983 resolution to make June 23 the city’s Gay Pride Day and later supported nondiscrimination legislation protecting gays, lesbians, and bisexuals. In Congress, he opposed the Defense of Marriage and publicly supported same-sex marriage as early as 2009.

Though running as an independent candidate, Starbucks CEO Howard Schultz is also trying to influence the Democratic nomination, saying that he’ll abandon his campaign if the party nominates a centrist — essentially holding all of us non-billionaire voters hostage until he gets what he wants.

The field is the most diverse ever, filled with female candidates, candidates of color, and at least one openly gay candidate. Though Sanders stands out as a Jewish democratic socialist, he’s still a straight, white man, just like 44 of the last 45 presidents — give or take Lincoln and Buchanan. When asked by VPR’s Bob Kinzel if he’s worried that he might no longer best represent “the face of the new Democratic Party,” Sanders defended his campaign by invoking Martin Luther King’s “I Have a Dream” speech — a pro-Black civil rights speech that was definitely not intended to give white men the confidence to run for president.

“We have got to look at candidates, you know, not by the color of their skin, not by their sexual orientation, or their gender, and not by their age,” he continued. “I mean, I think we have got to try to move us toward a non-discriminatory society which looks at people based on their abilities, based on what they stand for.”

It’s going to be a long two years.