Home Gay Life Bernie Sanders Has A Message For His Male Supporters In The South:... 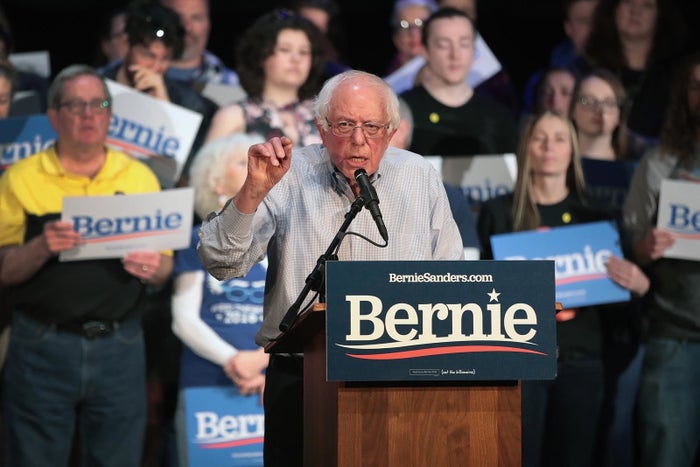 BIRMINGHAM, Alabama — At the start of a four-day road trip across the South — looping east from Asheville, North Carolina, south to rural South Carolina, west to black churches in Atlanta, through the Talladega National Forest to end here Alabama, now home to the most restrictive abortion policy in the United States — Bernie Sanders had a message for his male supporters.

«Let me say something to the men who are here today,» he said an outdoor venue in Asheville, a tree-lined patch of green along the French Broad River. «This is not just a woman’s issue.»

The 77-year-old senator pointed his finger at the crowd from right to left.

«This is an issue that impacts all of us. And the men must stand with the women in their moment of need.»

Before moving through the rest of his speech — a 40-minute demand for a more “just” system of health care, voting, education, and economics — Sanders deviated from his prepared remarks, according to a copy of his speech, to add one more thing.

«Alright, guys?» he asked. “You in this struggle as well?”

The crowd in Asheville, a seat of liberal activism in the red-leaning state, roared back in reply.

The Vermont senator repeated the refrain at most of his rallies this weekend, decrying the abortion law passed here as «disturbing,» «grotesque,» «blatantly unconstitutional,» and a threat to the lives of women.

The Alabama Human Life Protection Act, signed into law on Wednesday by Republican Gov. Kay Ivey, outlaws almost all abortions in the state, even for victims of rape and incest. Four other states — Georgia, Mississippi, Kentucky, and Ohio — have signed similarly restrictive laws as part of a coordinated effort to overturn Roe v. Wade, the 1973 Supreme Court case that protects a woman’s right to an abortion.

Sanders, who like many of the Democratic presidential candidates on the campaign trail this weekend spoke in fervent terms about fighting the laws, made it a particular point to address the men in the audience while doing so.

In 2016, during the tight and at times bitter contest for the Democratic nomination, some Hillary Clinton supporters viewed Sanders voters as a less diverse coalition standing in the way of the first woman president. Women who supported Clinton took particular issue with his comment, one he later reversed, stating that Washington-based abortion-rights groups that endorsed Clinton «are, in fact, part of the establishment.”

Asked about the choice to directly address his male supporters, Sanders seemed pleased that someone had noticed. „Good. Good question!“ he said. „Because it’s, it’s not just a woman’s issue. It’s obviously a woman that goes to get an abortion, but this is an issue that men cannot separate themselves from it.“

»Last I heard, it takes two to have a baby,” he added.

«I think men understand that, but I think that this is not just a woman’s issue. It’s an issue that all of us have got to stand up and say that in America in 2019 you cannot take away a woman’s right to control her own body — and men have got to stand with the women on this issue.»

Over the weekend, from Asheville to Charlotte to Birmingham, Sanders promised to «fight those laws in every way possible.» If implemented, he told supporters, «the consequences will be absolutely disastrous and threaten the very lives of women. It is not an exaggeration to say that banning legal, medically assisted abortion — and forcing women back into the arms of quacks — will quite literally kill women.»

«That is what happened before Roe v. Wade, and we will not go back.”

Across the crowd, women pumped their “Bernie” signs in the air as Sanders spoke at length about the law, calling it “draconian” and a matter of “life and death.” Earlier on Sunday, he told them, the host of NBC’s Meet the Press asked if Sanders would, if elected president, apply a “litmus test” 0n Roe v. Wade when choosing to nominate a Supreme Court justice. “Let me tell you what I told him,” he yelled. “Yes! I will have one. I will not appoint anyone to the United States Supreme Court unless that man or woman is prepared to defend Roe v. Wade.”

Sanders, however, did not delve into more specifics about what he would do to fight the laws if elected. Sen. Elizabeth Warren put forward a detailed plan Friday for what she would do, including pushing for federal laws that would enshrine Roe’s protections and bar states from passing restrictive laws.

At stops across the Midwest, Sanders has spoken at length about ways to use executive power to protect blue-collar workers, saying he would withhold federal contracts from companies that outsource jobs or cut pay and promised benefits. At a stop in Denmark, South Carolina on Sunday, when asked if he thought he could use the presidency to push back on states that restrict access to abortion, Sanders only said he would “use all of the resources [of] the government to make sure that every woman in every state in this country can control her own body.”