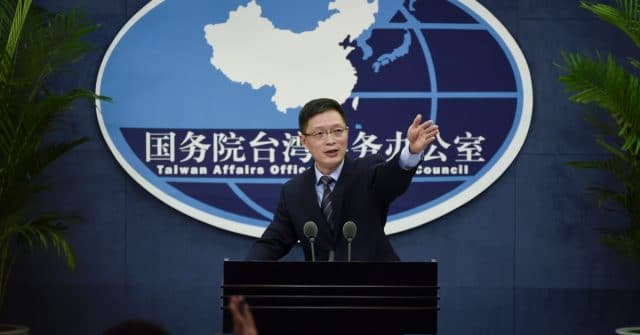 A spokesperson for the Chinese government has signalled that China will not follow Taiwan in embracing same-sex marriage.

Taiwan introduced same-sex marriage in May in response to a court ruling in the issue, making it the first country in Asia to permit gay couples to get married.

The step has been warmly welcomed by LGBT+ campaigners, but it has received a less enthusiastic reception from the Chinese government, which does not recognise Taiwan it as a country in its own right, and regards the region as part of China.

According to Reuters, a spokesperson for China’s Taiwan Affairs Office, An Fengshan, addressed the issue of same-sex marriage in a news briefing.

A gay couple gesture during a mass wedding banquet in front of the Presidential Palace in Taipei on May 25, 2019. (SAM YEH/AFP/Getty)

An Fengshan told reporters that the office had “noted reports on the island” about same-sex couples being allowed to marry.

He added: “The mainland has a marriage system of one man, one woman.”

The official did not elaborate further on his comments.

It is legal to be gay in China, but LGBT+ people are still commonly subject to discrimination and state censorship.

The country does not permit same-sex marriage, though some regions do recognise overseas same-sex unions in limited circumstances.

Hong Kong, which maintains autonomy from mainland China, made spousal visas available to same-sex couples for the first time after a court ruling in 2018.

Like mainland China, Hong Kong only recognises marriage as between a man and a woman, but the international business hub has come under pressure from employers and LGBT+ activists to respect the rights of same-sex couples.

In July 2018, Hong Kong’s Court of Final Appeal ruled that same-sex couples who have entered unions elsewhere must have their relationships recognised as part of the spousal visa application process, following a high-profile challenge from a lesbian couple.

In the wake of the ruling, the Hong Kong government announced a new policy that allows the recognition of same-sex unions for visa applications, but no other element of law.