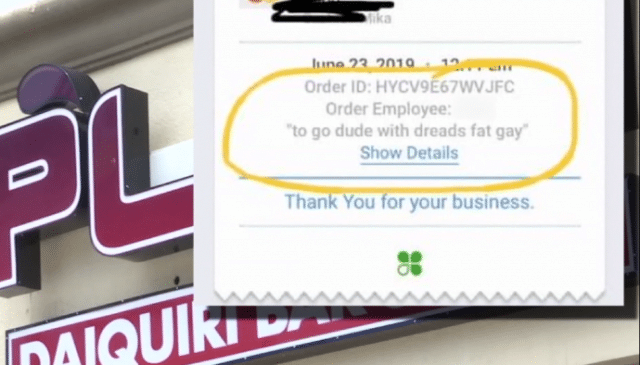 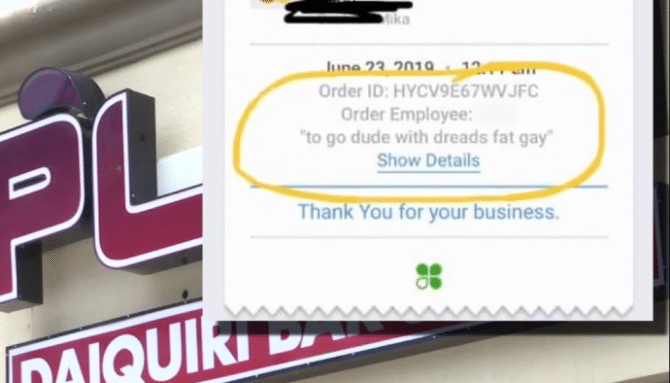 A Houston man was shocked to discover derogatory language used to describe him at the bottom of his receipt written by a restaurant employee.

The man, who asked not to be identified, dined at Plush Daiquiri Bar and Grill in Houston last Saturday. When he went to pay bill, he noticed the words “to go dude with dreads, fat, gay” at the bottom of the receipt.

“I don’t even know her, she don’t know me,” he tells his local news station. “What’s that, like, stereotyping? For her to not even know me and say ‘fat, gay’ and this and that.”

But the restaurant owners don’t seem to see any problem with it.

“It was just her way of describing him,” says co-owner Marcus Barlow. “It wasn’t nothing against him or nothing personal. It was her way of referencing back who to deliver the food to.”

Of course, another way of doing this would have been to ask for the customer’s name.

“She was unaware that he could see it,” adds Leighton Dickson, another co-owner, “and she was very apologetic to us about it, and she was disciplined.”

In other words: As long as a customer can’t see what derogatory words are being used to describe them, it’s OK.

The waitress has since been put on a three-day leave. Meanwhile, Dickson insists, “We do no discriminate at all at Plush.”

They just call their customers fat and gay behind their backs.

Meanwhile, the customer seems to be a lot more forgiving than most people would.

“If anybody asked about it, I would tell them, it’s a good restaurant,” he says. “I have nothing bad to say about the restaurant. I just will not go back.”