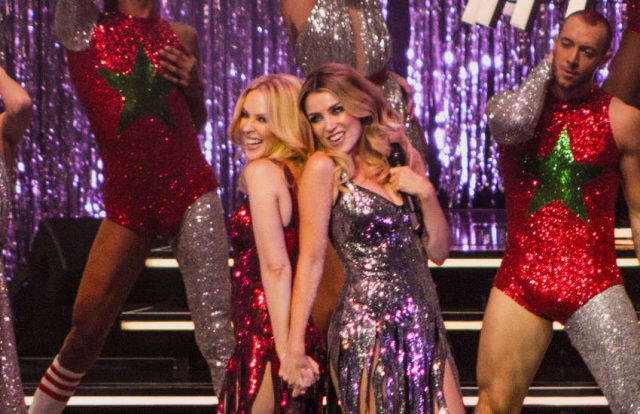 Dannii took to Instagram and Twitter last night (27 May) with a photo of the pair from their childhood. Dannii’s holding a soft toy while they’re both wearing roller skates.

‘Happy Birthday to my big sister,’ Dannii wrote. ‘Now for a new year of fun and festivities. Love from Sister Disco’.

Kylie also celebrated her birthday with an adorable throwback photo of herself.

‘Thank you SO MUCH for all of your birthday wishes,’ she wrote on Twitter. ‘If only this little girl knew what the future held for her!’

After their time on Young Talent Time ended, Kylie starred in soap opera Neighbours, as girl next door, Charlene Robinson.

It would then be 30 years until the pair would perform onstage together.

Since they performed Sisters are Doing it for Themselves in 1986, they didn’t perform again until an appearance on X-Factor Australia.

Dannii was actually a judge on X-Factor at the time.

Kylie is releasing a fun compilation album on 28 June.