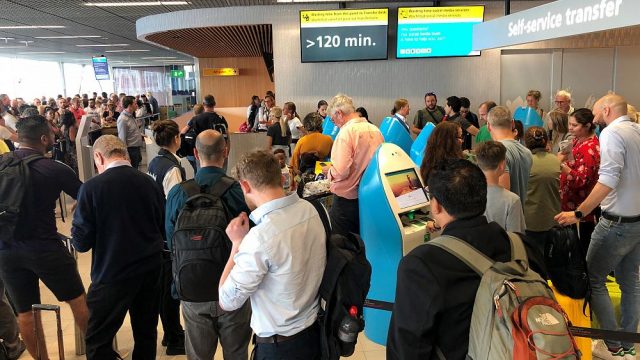 Passengers face delays because planes have been grounded at one of Europe’s busiest airports due to a problem with fuelling systems.

More than 180 flights have been cancelled to and from Amsterdam’s Schiphol Airport, according to Flightradar24.

In a statement published on Wednesday evening, the airport said aircraft were unable to refuel because of a fault.

“Planes at Schiphol cannot be refuelled right now,” read the statement. “Aircraft Fuel Supply, a third-party company that controls aircraft fuel supply, currently has a fault in their system.

“As a result, your flight may be delayed or cancelled by your airline.

“Schiphol and Aircraft Fuel Supply are working hard to find a solution. It is still unclear how long this will take, but it will definitely last into the evening.

“We regret any inconvenience for travellers and airlines.”