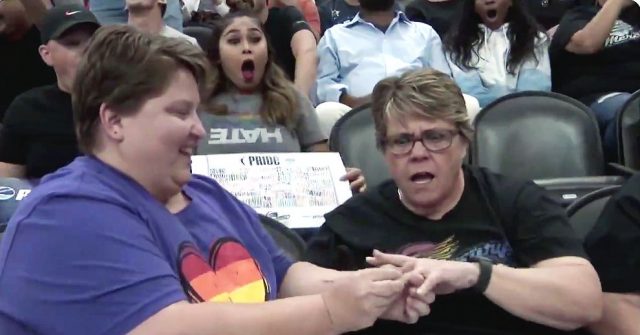 The most successful surprise sneak play of the night at Friday’s Phoenix Mercury game was not on the hardwood, but in the arena. It was Pride Night for the Arizona WNBA team and, with a little help from the broadcast team, a gay fan popped the question to her girlfriend.

Instead of a traditional “Kiss Cam,” the Mercury staff showcased LGBTQ fans with a “Pride Cam” on Pride Night on June 14. And when it was Shannon and Lori’s turn, one of the women stopped her girlfriend from kissing so she could grab her wallet. Even the announcers were caught unaware.

Watch what happenned next as tweeted by the team:

But to us, they’re two women in love, who love their hometown WNBA team, and are now engaged to get married. That’s all that matters, right? As writer Caissa Casarez of The Victory Press wrote, “I, for one, will take queer Jumbotron proposals any day of the week.”

We wish them the very best from all of us at Outsports.

Congratulations, Shannon and Lori! And thank you, Phoenix Mercury, for sharing the video of their Pride Night memory that we believe will indeed, surely “last a lifetime!”