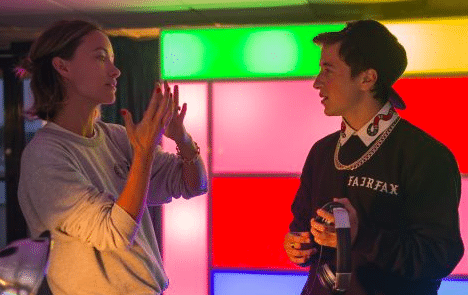 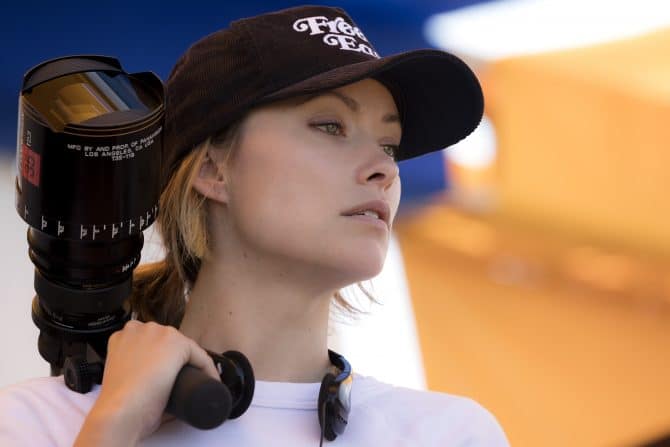 Olivia Wilde is known for roles on The OC and Vinyl, as well as for films like Tron: Legacy has spent most of her life in front of the camera earning accolades for her performances and for her beauty. Maxim named her the sexiest woman in the world in 2009. She and her partner, actor Jason Sudeikis, have two kids.

In Booksmart, Wilde takes on the high school comedy genre with a feminist and queer twist. The story follows two best friends and honor students–Amy (Kaitlyn Dever) and Molly (Beanie Feldstein) one straight, the other gay. Not content to graduate without attending any parties in high school, the two set off on the even of graduation to have a night they won’t forget. Along the way, they encounter an uppity gay couple (Austin Crute and Noah Galvin) a would-be influencer (Skyler Gisondo) and a cracked out social butterfly (Billie Lourd), all of whom play a role in making all hell break loose.

We snagged some time with Wilde to talk about her transition to directing, why she wanted to make a film about queer characters, and how to balance deep drama with slapstick comedy.

You know, I had wanted to direct a feature for quite a while, but I had to gain the courage to finally go for it. I dipped my toes in the water with producing, which is something I care passionately about. I love facilitating the work of other filmmakers and making movies that otherwise wouldn’t be made. So I’ve been producing documentaries and narrative features for the past seven to ten years. I have had the opportunity to witness the process of development through that experience. Both as a producer and as an actor, I’ve admired the drive and passion of directors. I started experimenting by directing short and music videos and quickly realized that I was my happiest on set as a director. So it was time to make a feature.

Well, Booksmart is an homage to the films that made me fall in love with movies. I grew up watching The Breakfast Club and Dazed & Confused and Fast Times at Ridgemont High and Ferris Bueller’s Day Off on repeat. This feels like a love letter to those movies that really made me want to be a part of this storytelling industry.

Someone brought it to me, which is very cool. I have a friend named Jessica Elbaum who is a producer and runs Gloria Sanchez, the wing of Gary Sanchez Productions [production company of Will Farrell & Adam McKay] that is focused on fostering female talent and telling female stories. She was co-producing Booksmart with Annapurna [Productions] at the time. She said “Listen, Booksmart is a script you need to look at. I know you want to direct a feature, and I think this could be great for you.” I will always be really moved and grateful that she thought of me. She dared me to pitch on this project. 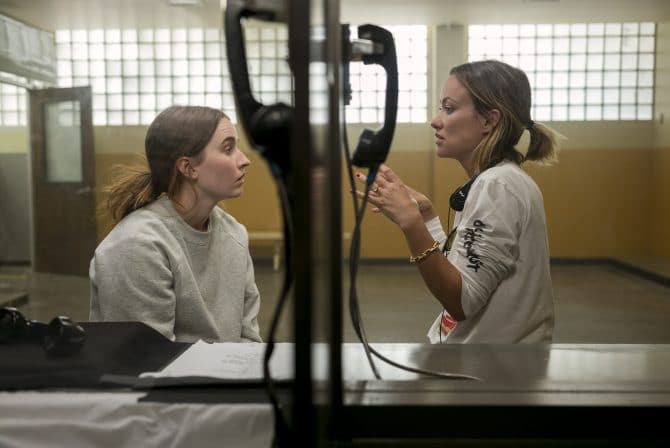 So I had a strong take on it. I felt very strongly about what I thought it could be. It was an earlier incarnation of this script which was very different but had the same core story of two brilliant young women in a close friendship. So I pitched on it. To my total shock and awe, I got hired, and it became my complete focus. It was such an exciting process. From the beginning of this process up to now, it’s been the most thrilling experience of my life.

There was no resistance, which is great. I would have been really disappointed had anyone resisted. It just seemed so reflective of these times, and of Generation Z in particular. This film is created to reflect the instinct and lifestyle of this young generation that I find really inspiring, in particular, the fluidity of sexuality and gender identity. I think that has positive effects well beyond the specifics of sexual orientation. There is so much more that happens when people open their minds and hearts and just rid themselves of hatred.

This is what I really think about the responsibility of storytelling. We made a story that, at its heart, is about friendship. It’s a simple but universal story. In that, we present a relationship where the two main characters have different sexual orientations and it’s a non-issue. That is how people should live their lives. It should never be something that causes anyone to think of one another, or to prevent them from being close. It’s interesting that 15 years ago, this is something that would have been seen as a niche film.

We are able to be a mainstream film, a very commercial film where several characters are queer and it’s not a big deal. I think that’s reflective of my own personal feelings. It’s never a big deal to me. It’s never the first question I ask anybody. So why would I create a movie where it was more than just one quality of many for each character? 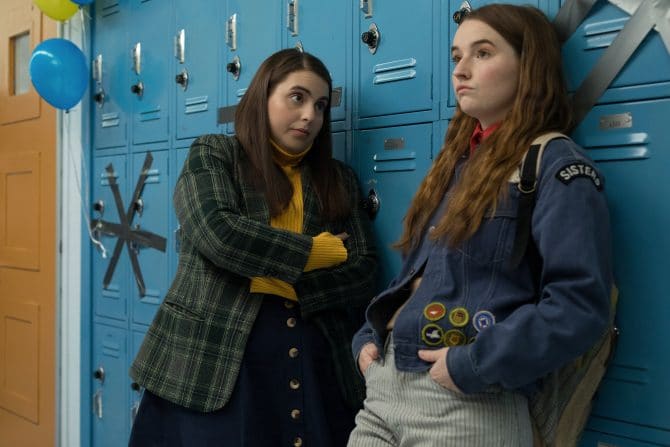 It’s funny, when we were about to shoot the scene between Amy and Hope [two queer characters] I realized that I hadn’t asked [actresses Kaitlyn Dever and Diana Silvers] if they were comfortable. I just thought love scenes are love scenes. And it occurred to me I never thought about asking them if they were ok. So I went up to them and asked if they had any issues doing the scene. And they were like of course not.

It really is insulting. Why aren’t straight sex scenes called “girl on boy?” I think it’s so crazy that we just kind of accepted that for so long. I just find that really truly insulting. That was accepted for a long time. But, I think we’ve evolved beyond that because of this younger generation saying “We reject your stupid labels. We reject the way you’ve structured your society. We’re just going to be who we are and live our lives.” That’s who I made this film for. That inspires me to be optimistic about the future.

It’s one shot, and that’s a tribute to the talent of the cast and the crew. That was my dream shot. I really wanted to be able to capture characters listening. You know, when we see an argument on screen, we often just focus on the person who is speaking. We don’t have an opportunity to really watch what it feels like to see hurt from a person you love. We don’t really get to see that experience of listening to those words. So I wanted to keep it in one. You know, in order to tell a story about female friendship you have to acknowledge how joyful that relationship can be, and also how deeply painful it can be. The loyalty and devotion is so strong, that any kind of betrayal is deeply upsetting. So I wanted to honor the high stakes of the person who knows and loves you the best. Great filmmakers have taught me that you can make a film that is both hysterically funny, and tragically heartbreaking. That’s something I feel reflects life. 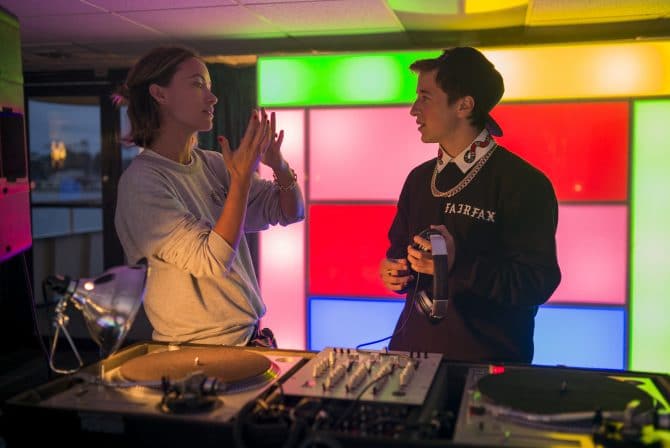 Well, I put Billie Lourd on my original pitch deck. I had a sense that Billie would be the perfect Gigi. She has an innate fearlessness. There’s a raw energy to her. She is incapable of pretense. She cannot bullsh*t. She’s pure and transparent and incredibly exciting to watch. When I gave her direction in her audition, I said. “There’s a bit of Courtney Love to Gigi. You don’t know if she’s going to kiss you or punch you in the face.”

That was all Billie needed. I really admire her fearlessness. That’s not easy. She’s also the most professional actress I’ve ever worked with. I was blessed with this cast that everyone was very professional. But she, in a supporting role, made herself so available to the process. She’s an incredibly hard worker who had no issue with staying late into the night because, of course, I wanted to add her to every moment of every scene.

I asked her “Hey Billie, I know you wrapped at 1 am. Would you mind staying until 4am?” And she was like absolutely…not telling me that she had to get on a plane at 6 am to go work somewhere else. She never shied from a challenge. She’s fearless and fascinating to me. I want to make every movie with her because she’s brilliant, and because when you encounter an artist that raw you don’t want anyone to ruin them.

I want her to stay fearless.

Booksmart opens in theatres everywhere May 24.