Home Gay Life Florida GOP Lawmaker Laughs When Asked If He Can Introduce Bill To... 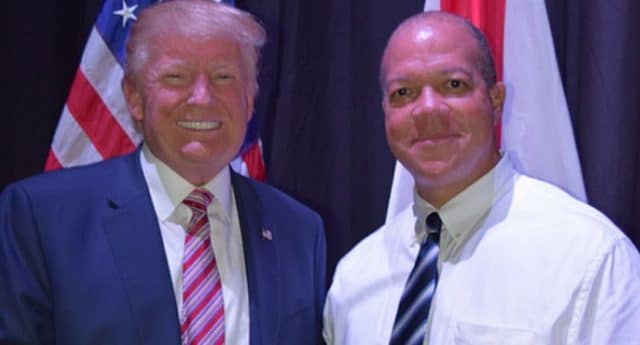 Florida Tea Party Republican state Representative Mike Hill is getting calls to apologize or resign after audio surfaced of him laughing when a constituent suggested introducing legislation providing for the death penalty for homosexuality.

One attendee asked the lawmaker why a Republican representative from a neighboring district, Alex Andrade, was cosponsoring the Florida Competitive Workforce Act.

The bill would add sexual orientation and gender identity to Florida’s Civil Rights Act, which bans discrimination in housing, employment, and public accommodations. Despite having bipartisan support in both the House and Senate, leaders of the chambers have kept the legislation from having a hearing.

In the recording, which was circulated by LGBTQ rights group Equality Florida on Friday, Hill explains that being gay is “a choice” and “a behavior” and that gay people don’t deserve the same type of civil rights protection under the law as is offered for religion or race.

“It’s a behavior, and it’s a choice,” Hill said, rejecting the idea that LGBT people should be a protected class. “You can say, ‘But I was born that way.’ OK, well, fine, but nobody’s forcing you to engage in that relationship, even if you were born that way.”

Then another person at the meeting brought up the Bible, saying, “In First Corinthians, it says a man who has an affair with another man shall be put to death.” Hill replied, “Says that in the Old Testament too.”

The questioner then said, “Can you introduce legislation?”

“Introduce legislation?” Hill asked, chuckling. “I wonder how that would go over?” he added.

Listen to audio of the response, below:

Equality Florida has called on Hill to apologize immediately. “Words matter. The comments made by Representative Mike Hill … are both deeply disturbing and dangerous,” said Brandon Wolf, a Pulse massacre survivor and Equality Florida media relations manager, in a press release. “Representative Hill should be embarrassed and ashamed for laughing along with the suggestion that he file legislation requiring the execution of LGBTQ people. We live in a diverse and inclusive state where the overwhelming majority of Floridians agree that no one should be discriminated against based on who they are or who they love. In less than two weeks our community prepares to mark three years since Pulse, the most deadly attack on LGBTQ people in this nation’s history, and we have never been more aware of how degrading and dehumanizing LGBTQ people causes harm.”

Rep. Carlos Guillermo Smith, the first openly gay Latino legislator in Florida, has demanded that Hill either apologize or resign.

I’m shocked & disgusted to discover a colleague who I’ve worked closely with would joke about punishing me by death for being gay. As a survivor of anti-gay hate violence, I know the consequences of homophobia are real. @MikeHillfl should apologize to LGBTQ Floridians or RESIGN. https://t.co/BqMoxLc6Vo

Listen to a longer version of the audio, via Rick’s Blog: