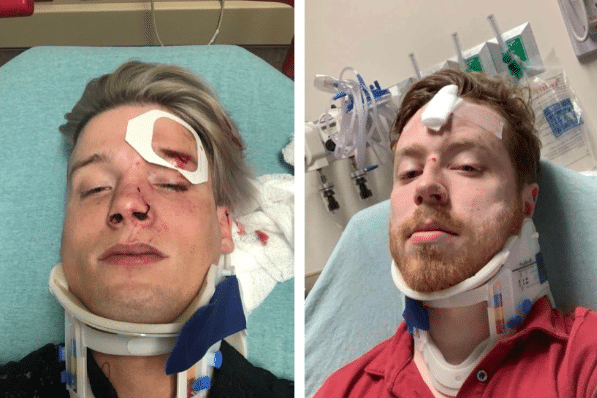 One man is suffering memory lapses from the attack

A gay couple in Austin, Texas said a group of men followed them over the weekend before attacking them and landing them in the hospital.

Spencer Deehring and Tristan Perry were out Friday (18 January) night celebrating a friend’s birthday. With their group of friends, they went to several bars over the course of the night.

According to local news station KXAN, the couple only had a couple drinks so they would be sober enough to drive home.

Deehring recounted what happened around 2:45 in the morning when they left the last bar. Due to his injuries, Perry suffered memory lapses and doesn’t remember the alleged attack.

As the couple was walking hand-in-hand back to their car, Deehring said a man walked past them and used a homophobic slur.

He said he retorted to the man, saying something like: ‘I’m sorry, I couldn’t hear you.’

That’s when Deehring said the man called over some friends and the group began following him and Perry.

‘They started following behind us pretty closely yelling every expletive you can think of,’ he recalled to KXAN.

‘The last thing I said to one of the guys before they attacked both of us was like, “I don’t have anything more to say to you guys, we’re just going home, leave us alone.”‘

According to Deehring, that’s when the men suddenly attacked Perry. He said they punched his boyfriend, breaking his nose and causing him to fall to the ground where they continued to assault him.

‘That was my first reaction, was to stop them from kicking him because he couldn’t receive one more blow to the head or he may well have been dead,’ Deehring said, recalling the moment he tried to fight back against the men.

‘It may have been worse’

A bystander reportedly saw what was happening and called 911. Deehring said he thinks it took more than 20 minutes for EMTs to arrive. Both he and Perry remained in the hospital due to their sustained injuries.

‘If the bystander had not been there [the attackers] may have continued, it may have been much worse,’ Deehring said.

Perry suffered a laceration on the back of his head and a broken nose. His teeth were also chipped in the attack and he has back and neck pain, as well as slightly memory loss.

He was rehospitalized on Sunday (20 January) when the bleeding persisted, but has since been discharged again.

After moving to Austin, Perry said he thought ‘everyone is going to be so open-minded’. Austin is known as a liberal city within the primarily red state.

‘I think that a lot of people think that and it’s overlooked that this could happen to anybody, anywhere, anytime,’ he added.

They set up a GoFundMe for their medical bills, which has already exceeded their goal.