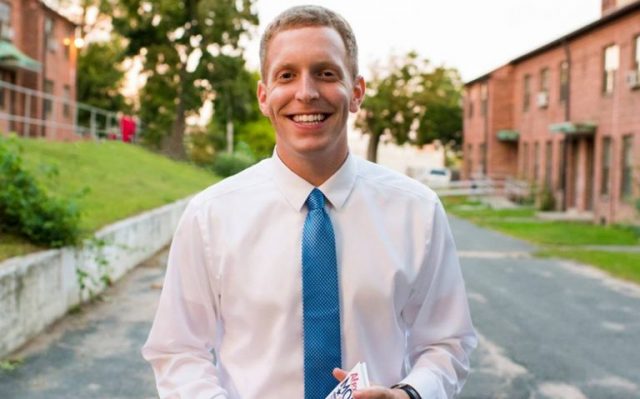 An anonymous ‘threatening’ note and defaced campaign sign have both been widely shared and condemned on Facebook.

Mayor Alex Morse of Holyoke has shared with his constituents, and by virtue of the internet the rest of world, an offensive note sent to his office which specifically targeted his sexuality in a ‘threatening’ manner.

Alex, who has served as mayor of Holyoke for five years, explained on social media that the card was sent to his office anonymously. It read: “Alex, you are one of the most selfish people that I know due to your ‘gay’ lifestyle. You are going down.”

Writing on Facebook Alex said: “Well, thank you sir. Anonymous hate mail isn’t uncommon and doesn’t typically bother me, but given we have a President-elect who just announced the appointment of an Attorney General who will do nothing to protect LGBTQ Americans and people of color, it’s important to bring to light the progress we need to protect and the challenges still ahead. #TrumpsAmerica.”

He also shared a picture of the offending card.

There was an instant outpouring of support from Alex’s friends and constituents with many condemning the anonymous hate and rallying behind him.

Speaking to the Boson Globe, Alex explained: “It’s a more threatening message than usual, and given the context of the culture that seems to have been elevated since the Trump election, I thought it was important to shine a light on this language and behaviour.”

He added” “It’s different than writing a note that says, ‘I don’t support gay marriage,’ or ‘I don’t support rights for someone.’ But to demean someone’s humanity based on their sexuality takes it to another level.”

However, that’s unfortunately not where the story ends. Less than a week on from receiving the hateful message, one of Alex’s signs was defaced with homophobic, incorrectly spelled, graffiti – ‘Suck’s’ doesn’t need an apostrophe guys.

“This makes me so very upset,” wrote the constituent who uploaded the picture to Alex’s Facebook. “What happened to treat others as you want to be treated. Or if you don’t have anything nice to say, don’t say anything at all. Or what about respect and tolerance.

“We already know Alex Morse is gay. So what is the point in this. Just to show your ignorance? I support and respect every human being. And love will always conquer.”

The post has since been shared a number of times and has been condemned by other Facebook users.

“Like any community, be it in Holyoke, Mass., or anywhere else across the country, there are going to be people who are small-minded and bigoted,” Alex told the Globe.

But, he added, “I know that the good always outweighs the bad.”