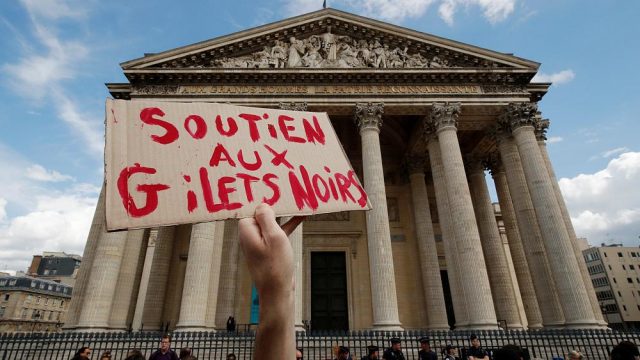 Hundreds of protesters occupied the Pantheon monument in Paris on Friday (July 12) to denounce the conditions illegal immigrants allegedly face in France.

The “Gilets Noirs” — a nod to France’s better-known “Gilets Jaunes” movement — are protesters from 34 migrant housing centres from the French capital and its region.

“Today, we immigrants without papers, inhabitants of social housing, tenants of the streets, are occupying the Pantheon”, their press release claimed.

“In the French Republic, we are paperless, faceless, voiceless”, the Gilets Noirs release continued.

“We are not simply fighting for documentation, but against a system that makes us undocumented immigrants,” their message said.

Around 600 protesters occupied the monument for a few hours.

“What do we want? Papers! For whom? Everyone!” the protesters chanted, gathered in the main hall of the French historical monument.

The French Senator Esther Benbassa, a member of the Green party, stood outside of the Pantheon to support the movement.

The Gilets Noirs exited the building around 5 pm, escorted by the police.

“Several hundreds of people illegally entered the Pantheon,” the Paris police said. “The police prefect has ordered the site’s evacuation by the police. The operation was just concluded.”

The group La Chapelle Debout!, one of the organisations making up the “Gilets Noirs”, reported on Twitter that the group, while still inside, had negotiated its exit with the police on the condition that no one would be arrested. But as the protesters exited the Pantheon, dozens were blocked by the police behind the building, on Rue Clothilde, and at least six of them were detained.

One of the organisers, who spoke to Euronews but did not share his name, reported “three injured”, including two protesters who had fainted, and an old woman who had been hurt in the evacuation.

“We have no idea what the police are doing,” he told Euronews. “This is not what we agreed.”

As Euronews spoke on the phone with the activist, clashes between police and protesters could be heard in the background.

Videos posted on social media showed police officers surrounding protesters, some of whom were on the ground.

The choice of Paris’ Pantheon as the protest’s location carried heavy meaning: it is the resting place of the French nation’s illustrious men and women, such as writer Victor Hugo and scientist Marie Curie.

“We are occupying the graves of your great men to denounce your profanations,” the press release read, adding: “France is continuing slavery in a different way.”

The group’s press release listed the plight of undocumented immigrants in France, who sleep “under highways” when there are “200,000 empty flats in Paris”, or in migrants housing centres where the police come to arrest them “in their bed”. They asked for their fellow migrants in detention centres to be set free and demanded that these centres be closed.

Euronews contacted the French prime minister’s office for comment regarding the protesters’ demand to meet with the PM, and the French interior ministry, which oversees the police, regarding the arrests made at the protest. No response had been received at the time of publication.

In June, the Gilets Noirs already occupied the headquarters of Elior in the French capital’s financial district La Defense, to denounce “companies that exploit undocumented immigrants”.

In May, the group occupied terminal 2F of Paris Roissy airport to protest against “Air France’s collaboration” in cases of expulsions of immigrants.