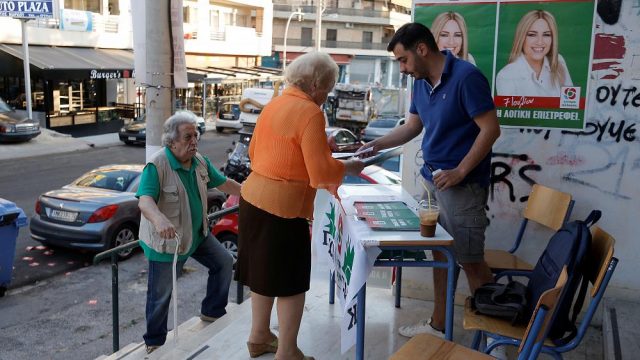 For the sixth time in just a decade. and for the first time since the country successfully exited its bailout programme in August 2018, Greeks began voting on Sunday to elect a new government.

Prime Minister Alexis Tsipras called the snap election on May 26 after his left-wing SYRIZA party was dealt a heavy blow in the European parliamentary ballot, coming 10 percentage points behind the conservative New Democracy (ND) party.

The main opposition party also convincingly swept the board at local and regional elections held on the same day.

Voting started at 7.00 am local time (06.00 CET) and ends at 7.00 pm, with first official projections expected about two hours after voting ends.

How did we get here?

SYRIZA was elected in January 2015 and formed a coalition government with the far-right populist “Independent Greeks” party (ANEL), based on an anti-austerity programme and rhetoric. After six months of intense negotiations with Greece’s lenders and a referendum held in July, the government signed a third bailout programme and the country went back to the polls in September to decide whether SYRIZA or ND was best placed to implement the memorandum and, consequently, the austerity measures.

SYRIZA won and again formed a government with Independent Greeks. This coalition lasted until January 2019 when ANEL quit the government due to their opposition to the Prespa Agreement. This agreement between Greece and North Macedonia (then the Former Yugoslav Republic of Macedonia or FYROM) was heavily criticised in Greece, particularly in the northern region of Macedonia.

ND, under Kyriakos Mitsotakis, also strongly opposed this agreement, and some of its most prominent MPs joined the demonstrations against it. Mitsotakis also said that he would veto a North Macedonian bid to join the European Union if he were in power.

Mitsotakis, who comes from a famous political dynasty, hopes to follow the footsteps of his father as prime minister, while a sister of his was foreign minister.

Why did SYRIZA lose the European elections?

Commentators believe SYRIZA’s defeat in the EU elections is a result of the party losing touch with the middle class due to the primary surpluses the country achieved as part of its bailout programme – stemming from heavy taxation rather than economic growth.

The working class, upon whom SYRIZA relied heavily during the 2012 and 2015 elections, also appeared to have broadly turned its back on the ruling party as it failed to mitigate the effects of the labour market deregulation. The steady decrease in the unemployment rate and the increase to the monthly minimum wage to €650, seem to not have been enough.

What are the two main parties pitching?

This election is widely seen as a race for the votes of the middle class — lawyers, doctors, mechanics, skilled employees, and public servants — many of whom say they’ve been bearing the burden of the economic crisis with no help from SYRIZA.

These days, according to the OECD, nine out of ten middle-class households in Greece are having serious difficulties meeting their basic needs. Seven in ten individuals polled say they cannot face unexpected expenses.

After almost three years of harsh opposition, ND has softened its rhetoric and is focusing on economic growth and security. Mitsotakis promises new investments, lower taxation, more and better-payed jobs and more police on the streets of large cities.

On the other hand, Tsipras and SYRIZA claim that now they are finally able to implement their programme, without the burden of the coalition with Independent Greeks and that of the memorandum. They claim Mitsotakis wants to implement a seven-day-labour week and further deregulate the labour market, along with reducing the number of public servants.

What do the polls show?

According to the latest polls, New Democracy has a lead of 9-12% but one of the main questions ahead of the ballot if whether it will be able to form a government without needing coalition partners. The common understanding seems to be that Kyriakos Mitsotakis and ND will manage to gain more than the necessary 151 parliamentary seats, with the exact number depending on the parties that will enter the parliament.

As most polls show, the number of parties that manage to pass the 3% parliamentary threshold, ranges from five to seven. ND and SYRIZA come first and second respectively, followed by the social-democrat Movement for Change (former PASOK + allies), the Communist Party and the ultranationalist, far-right Golden Dawn. The far-right populist Greek Solution and the Democracy in Europe Movement 2025 (DiEM25) led by the former minister of finance, Yanis Varoufakis, are also running but may not secure the 3% of the vote necessary to get into parliament.

Is a coalition inevitable?

In the event that New Democracy does not manage to form a government and the subsequent negotiations between the parties do not bear fruit, Greece will most likely be heading to the polls again in August.

In that case, the election will take place with a simple proportional representation system, and without the 50-seat bonus to the first party, which makes a coalition almost inevitable in order to achieve the formation of a government.