Home Gay Life Guys Sound Off On What It Was Like To Be Gay In... 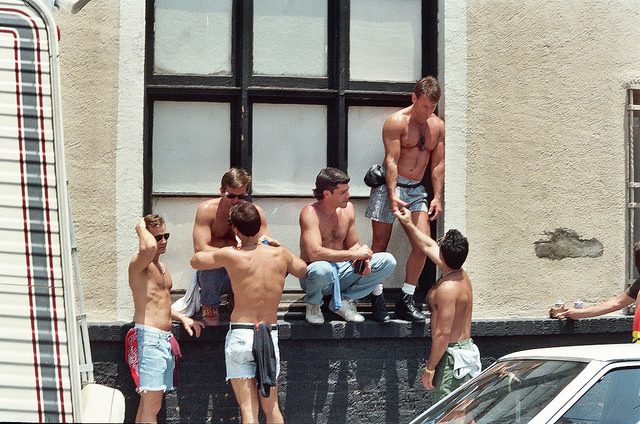 A young writer working on project about gay life in the mid-1990s recently turned to Reddit for help with his research, and the responses have been surprisingly interesting.

I’m a writer and I was curious about this. There’s a lot of information about the 80s (for obvious reasons) but not a ton about the 90s. I’m pretty young so I don’t remember much about the 90s, so I’d appreciate the help.The story is set in 1995, in LA. It would help a lot to know stuff specifically about LA, but if you just have information about what it was like in the mid 90s that’s good, too.Things like how and where gay guys met, the after-effects and continuation of the AIDs crisis, political climate, any of that stuff is good. I’ve done some reading but I feel like it’s not enough.Thank you so much for your time and responses.

Now, check out some of the replies…

Several people mention the homophobic social and political atmosphere in the country at the time.

“The Religious Right was still very powerful at that point,” one person writes. “Look up how Bill Clinton’s sex scandal nearly brought down his presidency. Look at the discussions around DADT and DOMA.”

“I remember being scared to come out because my parents (or at least my mom) openly used anti-gay language, would listen to Dr. Laura in the car when we went somewhere, and would openly comment against pro-gay causes,” another person adds.

“Los Angeles in general was kind of liberal, but not so liberal as it’s become over the last 20 years,” a third person chimes in. “CA was still electing Republican governors. The anti-gay marriage Prop. 22 passed in 2000, including being voted for by a majority of people in Los Angeles.”

They also mention how gay men started fleeing en masse from small towns and rural areas to bigger cities where they could live their lives more openly.

“In the mid-90s, many gay men left rural areas if they could and went to places like New Orleans, Atlanta, D.C., etc.,” one person recalls, “so the gay people left behind were even more isolated, especially if they were poor or uneducated and couldn’t easily get out.”

“People fleeing other parts of the country would move to WeHo and try to fit in by quickly adopting all the dress styles, manners, and other habits of those who lived there,” another person adds. “Lots of Mormons fleeing Utah.”

HIV/AIDS is also brought up.

“1994-1995 was pretty much the peak of deaths from AIDS in the United States because the peak of infections had been in the early 80s,” one person says. “The natural course of the progression of the disease caught up with many people at around the same time. The death rate dropped sharply in the later 90s.”

He continues: “The depth and breadth of that grief left its mark on all of us who lived through that period. I was young enough to have known what safe sex was before becoming sexually active, but the age group just a few years older was decimated.”

Another person writes: “[Safe sex] was indoctrinated into us because of the AIDS crisis, and since anti-retroviral drugs were still in their infancy HIV was still very feared. There was actually a kid in my class who was born with a heart condition and he ended up getting HIV from a blood transfusion when he was an infant. Poor kid was out sick all the time and died when I was in third grade.”

And, not surprisingly, Madonna gets a little shout out.

“The only person whom I read publicly defending the rights of gays and lesbians was Madonna,” one man explains. “So I always looked up to her in some ways. I remembered watching Truth Or Dare in the cinema, and her acceptance and embrace of her gay dancers–whom she had referred to as her ‘family.’”

Then, of course, there was the social scene, which primarily included clubs and chatrooms.

“Club culture was really big because it was what you had to do to meet other gay guys,” one guy says. “Gay dot com came online sometime around the late nineties and provided an alternative. Back then it was this awful Java-based chat client.”

He continues: “At the time chat rooms were still social spaces, so you’d have people who would be there just to hook up who might spam out ads in the main chat, but you’d also have people actively engaging in group conversations. It’s something I really miss from back then, as I made a lot of good friends that way and nowadays everything is catered toward people who are just looking for sex.”

Do you have any memories of being gay in the ’90s? Share them in the comments below…