Harris, the daughter of Jamaican and Indian immigrants, said the issue of race was deeply personal for her and looked straight at Biden to challenge him to explain himself.

“I do not believe you are a racist. And I agree with you when you commit yourself to the importance of finding common ground,” said Harris, 54, a U.S. senator from California.

“But I also believe – and it’s personal and it was hurtful to hear you talk about the reputations of two United States senators who built their reputations and career on the segregation of race in this country.”

Biden, who has faced heavy criticism for his recent comments saying he worked with segregationists decades ago to get things done in the U.S. Senate, defended his record on civil rights.

“It’s a mischaracterization of my position across the board: I did not praise racists. That is not true,” he said. “If we want to have this campaign litigated on who supports civil rights and whether I did or not, I’m happy to do that.”

Biden and Bernie Sanders trained their sights on Trump immediately as the debate began.

Biden, the former vice president making his third run for the White House, said Trump’s tax cuts for the wealthy and other economic policies were increasing economic inequality in the United States.

“Donald Trump has put us in a horrible situation. We do have enormous income inequality,” Biden said. “The one thing I agree on is we can make massive cuts in the $1.6 trillion in tax loopholes out there, and I would be going about eliminating Donald Trump’s tax cuts for the wealthy.”

Sanders and Biden shared the stage with eight other Democrats, including two other top-tier candidates: Harris and Pete Buttigieg, the mayor of South Bend, Indiana.

But like the Democrats who debated on Wednesday, the contenders disagreed on the best way to expand healthcare coverage. Asked who would back a plan that eliminated private insurance, only Sanders and Harris raised their hands.

Like the previous night, the Democrats frequently talked over one another, shouting to get their points across as some of the lesser-known contenders tried to get noticed.

“Americans don’t want to witness a food fight. They want to know how we’re going to put food on their table,” Harris said at one point.

Sanders defended his big-spending plans for a Medicare-for-All healthcare plan, saying it would reduce premiums for many but that some in the middle class might pay more.

“People who have health care under Medicare for all will have no premiums, no deductibles, no copayments, no out-of-pocket expenses. Yes, they will pay more in taxes, but less in healthcare for what they get,” Sanders said. 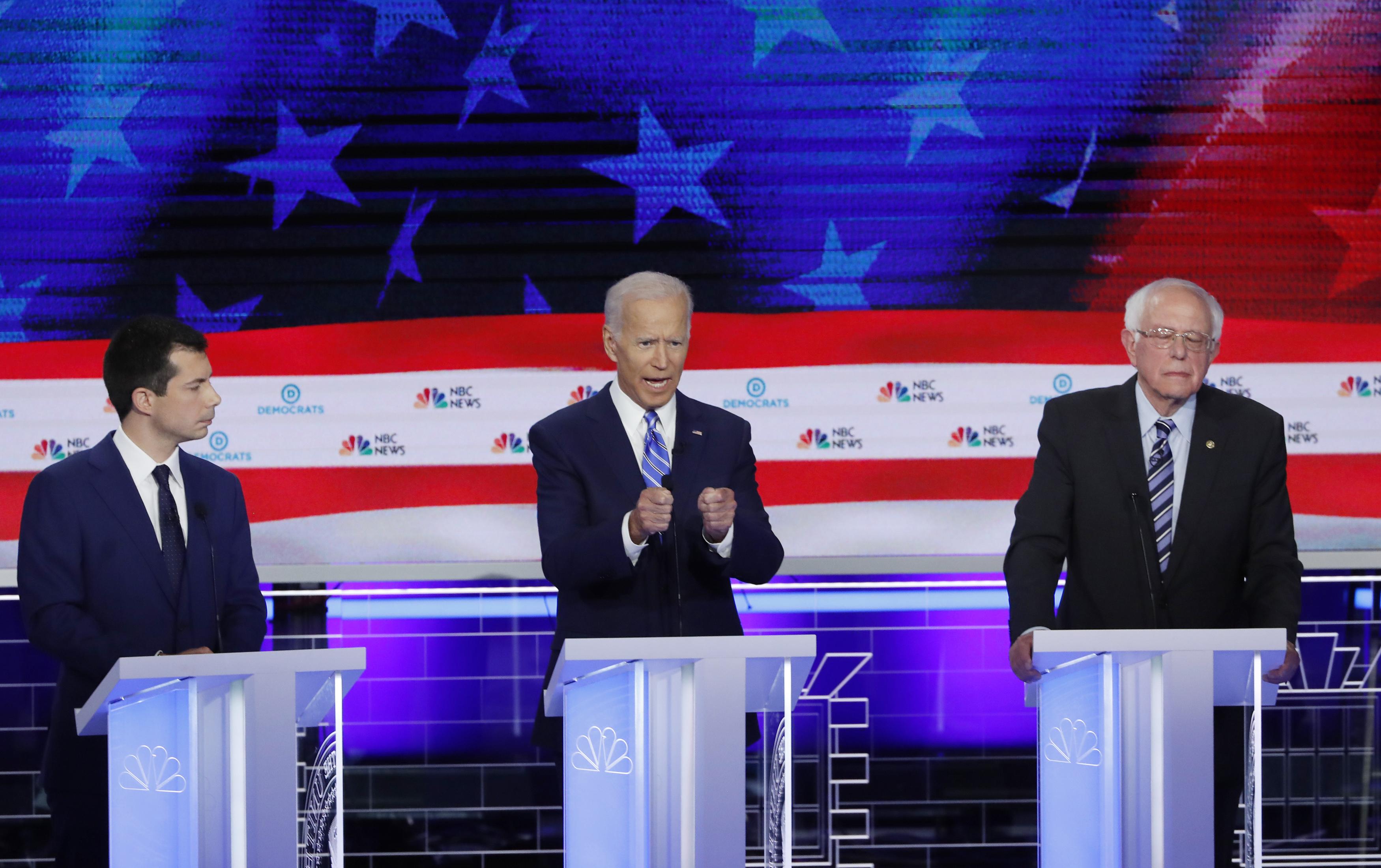 “He was right when he said that 32 years ago. He is still right today,” Swalwell said.

Biden responded: “I’m still holding onto that torch. I want to make it clear.”