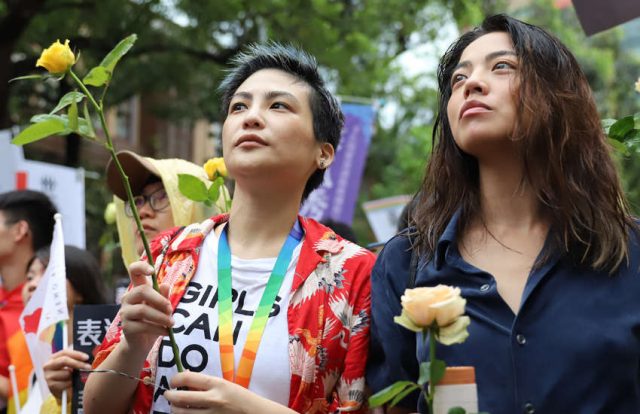 The bill passed with 93 lawmakers voting for the bill, 66 opposing, and 27 abstaining.

Taiwan was rushing to pass a bill before a 24 May court deadline.

In 2017, Taiwan’s highest court ruled the Civil Code was unconstitutional because it did not recognize same-sex marriages. Judges gave lawmakers a two-year deadline to legislate.

But, in a devastating referendum in November 2018. Taiwan voters opted for a separate law to legalize same-sex unions rather than to change the Civil Code.

The government’s bill is, therefore, a compromise between the court ruling and the referendums.

Activists complained that the bill failed to offer genuine equality in line with the Constitutional Court ruling.

Many LGBTI couples, however, accepted the bill as a compromise after the devastating referendum results.

Since then, anti-LGBTI lawmakers introduced two more bills to parliament.

In March, LGBTI families slammed an opposition party bill as ‘homophobic‘. It does not include terms such as ‘marriage’ or ’spouse’.

Last week, lawmakers and activists slammed a second bill as  ‘discriminatory’ and ‘unconstitutional’.

It would allow relatives to launch a court appeal if they believe the marriage is ‘fake’.

Taiwan parliament to vote on same-sex marriage law next week