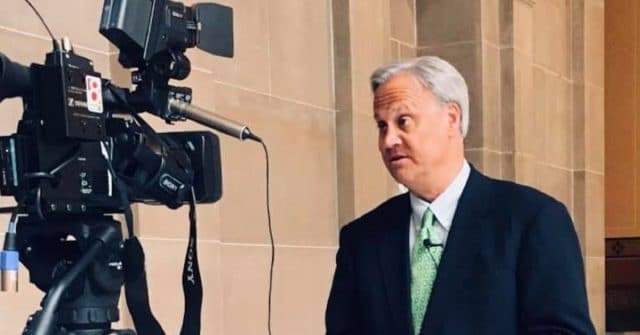 Republican Indiana state senator Jim Merritt plans to march at Indianapolis Pride, but organisers have told him he’s “not welcome.”

Merritt, who is currently running to become Mayor of Indianapolis, has faced a frosty reception after it was revealed he plans to take part in the city’s annual Pride parade on Saturday (June 8).

Local LGBT+ campaigners are sceptical of the candidate, who has consistently voted against LGBT+ rights across his 29 years in the state Senate.

In response to his plans to march in the parade, Indy Pride festival organisers made clear on Twitter: “Anti-LGBTQ+ individuals and groups are not welcome at our events. We encourage allies of our community to march along side us. He will not be walking in our Parade.”

However, the organisers later clarified that Merritt would be “permitted” to march as a private citizen.

A statement on Tuesday (June 4) clarified: “Indy Pride spoke with Jim Merritt’s campaign earlier today and re-iterated that he was not welcome at the Indy Pride parade and festival.

“A distinction was made between being ‘welcome’ and ‘permitted’. Those who have registered for the Pride parade are permitted to choose their participants.

“If a group chooses to invite Jim Merritt to walk with them, as a private citizen, that is their choice.

“It was expressed that, based on his anti-LGBTQ+ rhetoric and voting record, he would not be welcomed by Indy Pride or the majority of the community.”

The statement continues: “Allies marching in the Pride parade implicitly express support for marriage equality, equal housing rights, hate crimes legislation which includes transgender and nonbinary individuals, and that being part of the LGBTQ+ community is not a sin, a crime, or cause of shame.

“If Jim Merritt walks as planned, it is our hope that he expresses his change in beliefs publicly and specifically.”

Merritt told the Indy Star: “My intention for walking in the Pride parade is to show others that, over time, my opinions have progressed and theirs can as well.

“I own every vote that I have made in the legislature but that doesn’t mean that I haven’t learned along the way and that I would make the same votes today.