Home Fun Is Eminem gay or he just wants to make peace with the...

We have already shared with you some news concerning Matt Bomer and his sexuality. As it turned out he is gay and he is happy being in relationship with Simon Halls. But have you ever thought of Eminem being gay?

Eminem is a controversial celebrity and why would we wonder if he’s gay when we actually heard he’s homophobic. Or rather, is he gay or homophobic? Both, or none?

It’s no secret that many gays hide their sexuality under a homophobic attitude, but Eminem’s case is complicated. When did we start wondering about his true colors? Well, since he declared in The Interview that he was gay.

The movie (The Interview) was launched in late 2014’s and Eminem featured as himself in a Talk Show hosted by David Skylark (James Franco). During the TV Show Eminem confesses.

“When I say things about gay people and people think that my lyrics are homophobic, you know, it’s because I’m gay.

Asked to make things clear, he candidly continues: “I’m a homosexual… I like men.

“I’m more shocked that people haven’t figured it out yet. I mean, it’s kind of like I’ve been playing gay peek-a-boo,” the rap star concludes in the scene from The Interview.

After this scene, the tabloids went crazy speculating that Eminem was gay. Actually, titles were more than speculations: “Eminem Comes Out as Gay in The Interview,” some publications wrote.

Ok, so to clarify. We don’t know if Eminem is gay but we know that The Interview is just a movie and it’s not based on real facts as the film’s end credits note:

“This is a work of fiction. The characters, incidents and locations portrayed and the names herein are fictitious, and any similarity to or identification with the location, name, character or history of any person, product or entity is entirely coincidental.”

However, the situation is pretty complex. Is it that the artist just wanted to make peace with the LGBT community? Was it just a joke to shock and draw attention, or was it a subtle alarm that he is really gay?

There’s no official statement that Eminem is gay, so we give it a “no” for now. 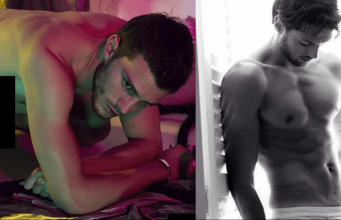 The hottest of GAY KISS gifs in black & white 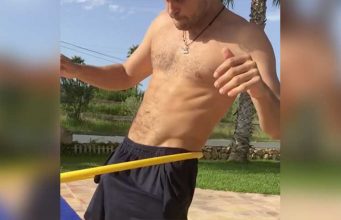