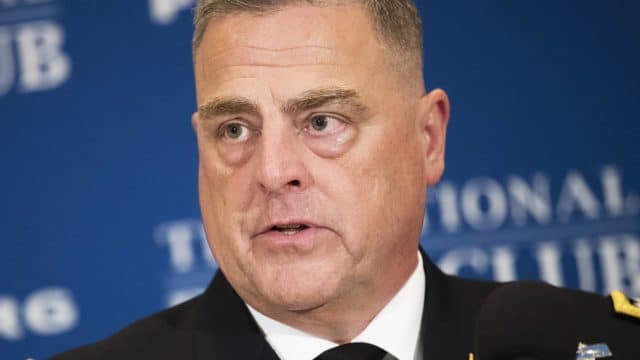 The Pentagon’s top officer directed military heads Thursday not to implement any changes to current policy on transgender personnel, a day after President Donald Trump tweeted they would be banned from serving.
General Joe Dunford, who is Chairman of Joint Chiefs of Staff, said in a short memo to senior officers and enlisted leaders that the current policy should remain in effect until Mr Trump gives formal direction to the Pentagon and Defense Secretary Jim Mattis issues new guidance.
“In the meantime, we will continue to treat all of our personnel with respect,” Mr Dunford wrote.
“As importantly, given the current fight and the challenges we face, we will remain focused on accomplishing our assigned missions.”
Transgender troops have been able to serve openly for more than a year, though a plan to allow them to sign up by July 1 was put on hold by Mattis.
On Wednesday, Mr Trump fired off a series of tweets stating that transgender people may not serve “in any capacity” in the US military, upending a key policy from Barack Obama’s administration and drawing swift condemnation.
Mr Trump said the ban would save on the “tremendous” medical costs and disruptions that transgender personnel could create.
The move caught the Pentagon off guard and Mr Trump made the announcement with little coordination with the department.
General Mark Milley, Chief of Staff of the Army, said he first learned of the change on the news.
“We will work through the implementation guidance when we get it, and then we will move from there,” Mr Milley said.
“To my knowledge, at the Department of Defense, Secretary Mattis has not received written directives yet.”
Pentagon spokeswoman Dana White said the department was still waiting for formal guidance from the White House.
“The Department will continue to focus on our mission of defending our nation and on-going operations against our foes, while ensuring all service members are treated with respect,” she said in a statement.