NEW YORK (Reuters) – Lady Gaga electrified thousands of revelers who gathered in New York on Friday to celebrate the 50th anniversary of the LGBTQ rights movement, exhorting the crowd to honor the past by using its “power” to extend and defend a half-century of progress.

Her warm-up speech and a subsequent rally, part of a series of World Pride events in New York this week, commemorated the so-called Stonewall uprising of June 28, 1969.

Early that morning, patrons of a Greenwich Village gay bar called the Stonewall Inn rose up in defiance of police harassment, triggering days of rioting. Their resistance gave birth to the national and global movement for equal rights for lesbian, gay, bisexual, transgender and other queer people.

Lady Gaga, a Grammy Award-winner whose signature song “Born This Way” has become an LGBTQ anthem, fired up the crowd, which began gathering in the park and public square outside the Stonewall hours earlier.

Appearing with a rainbow-colored jacket and thigh-high boots, she declared that Stonewall was the moment when LGBTQ people said “enough is enough.”

“I may not, to some people, be considered a part of this community, even though I like girls sometimes. I would never degrade the fight you have endured,” she told the cheering crowd. “You have the power. You are so, so powerful, and I hope you feel that power today.”

Later the rally alternated between political speeches and block-party gaiety. Musical performances and rhythmic dancing rattled windows in the low-slung neighborhood. Drag queens sang ‘80s hits like “I’m So Excited” in between speeches by activists from countries such as Uganda and Chechnya.

U.S. politicians including presidential hopefuls Kirsten Gillibrand, one of New York state’s two U.S. senators, and New York Mayor Bill de Blasio also took the stage ahead of what organizers are calling the largest gay pride parade in history set for Sunday, when some 150,000 marchers and 4 million spectators are expected.

In between featured speakers, impromptu rallies formed and dispersed outside the bar, with people waving homemade signs such as “Closets are for Clothes!” and “Gay Liberation Front,” paying homage to the radical group that formed immediately after Stonewall.

“Get laid, get drunk, and have a party,” said Martha Shelley, one of the Gay Liberation Front founders. “And then go home, roll up your sleeves, and fight.”

While the anniversary has a celebratory air, activists see the occasion as a way to protest U.S. President Donald Trump’s record, which many consider hostile to LGBTQ people. They also want to highlight the still-precarious position of LGBTQ people in many parts of the world.

Police raided the Stonewall, a Mafia-owned gay bar, ostensibly to crack down on organized crime. But their mistreatment of the patrons, part of a pattern of abuse against LGBTQ people, touched off the uprising.

While celebrating 50 years of progress, many LGBTQ activists are sounding the alarm about Trump administration initiatives, including a ban on transgender people in the military, cuts in HIV/AIDS research and support for so-called religious freedom initiatives that eliminate LGBTQ protections.

The White House claims Trump has long advocated LGBTQ equality, noting that he has backed a global campaign to decriminalize homosexuality.

The message has been lost on many LGBTQ people, as the Trump administration opposes extending anti-discrimination protection to gay or transgender workers under federal employment law, a legal issue currently before the U.S. Supreme Court, with a ruling due within a year. 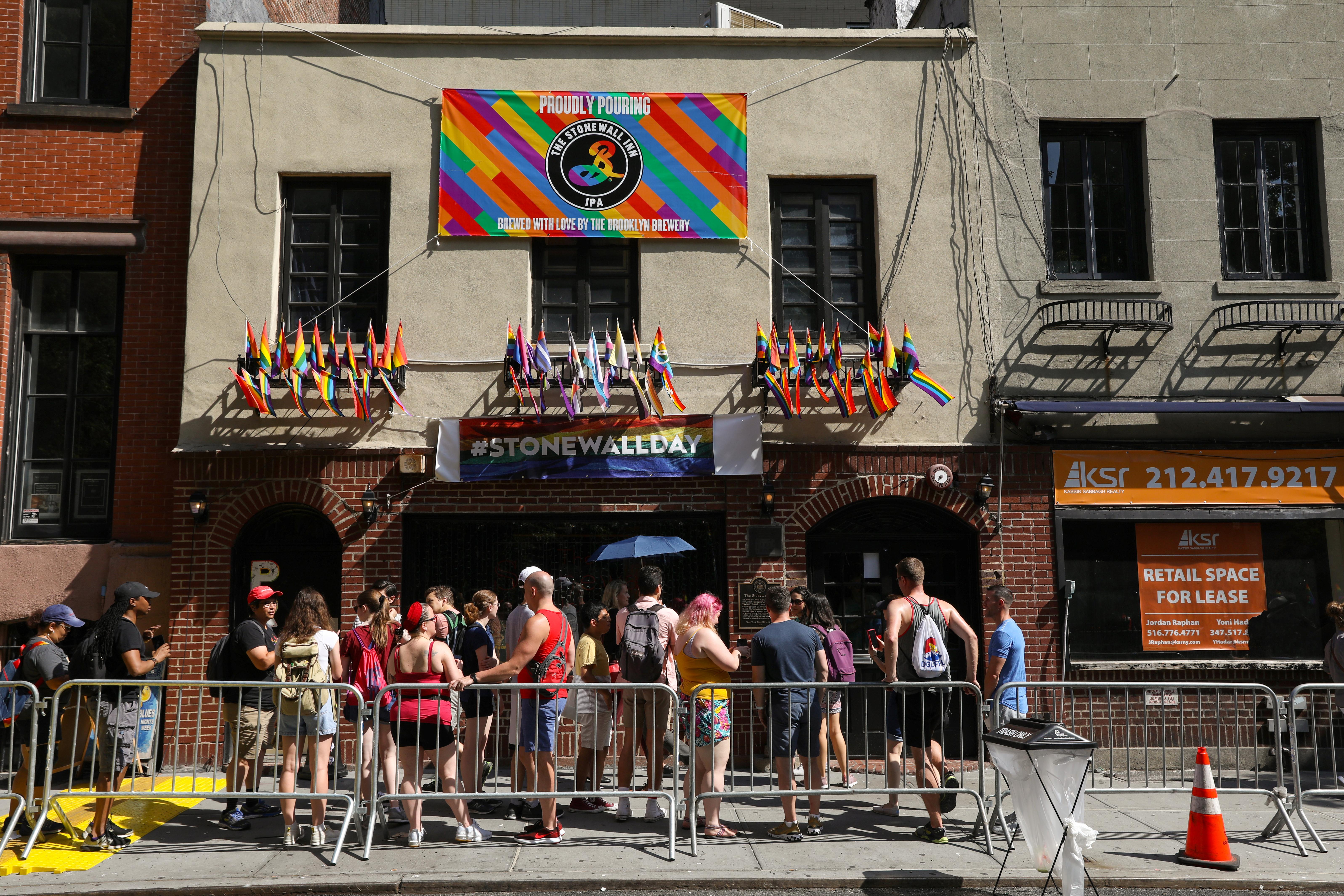 In nearby Washington Square Park, some 500 pro-transgender activists staged a Trans Day of Action, where some held up “Black trans lives matter” signs, lamenting that 10 transgender people have been murdered in the United States in 2019 after 26 were killed in 2018 and 29 in 2017, according to the LGBTQ advocacy right Human Rights Campaign.

“Trump has really proliferated this hate towards us,” said Qweenb. Amor, 30, a trans Latina. “It’s something we’re going to have to face every single day for the next 20 years, despite who wins the next election because these people who put Trump in power are people we have to work with every day of our lives.”