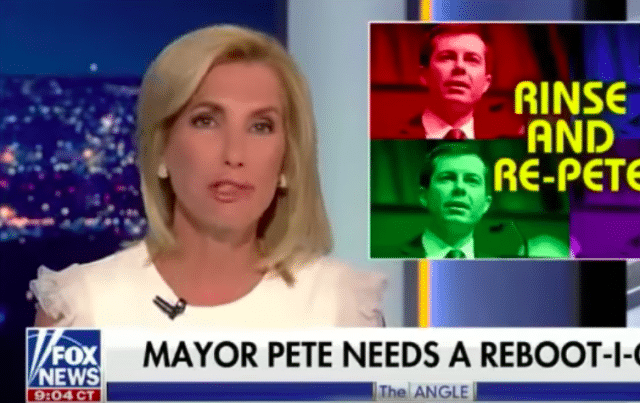 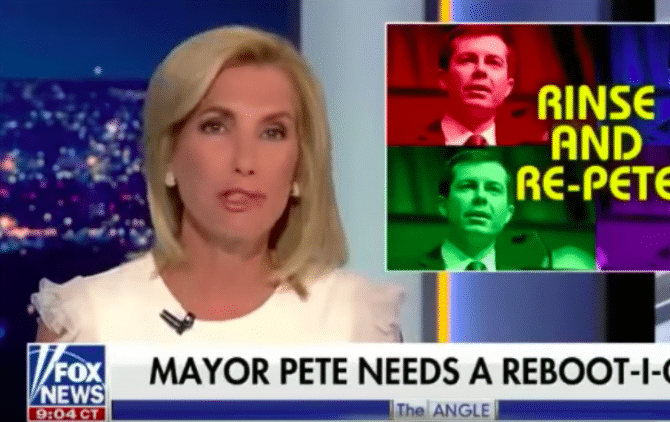 This just in: Fox News propagandist Laura Ingraham can dish it out but she definitely cannot take it.

The 55-year-old TV anchor ripped into 2020 hopeful Pete Buttigieg on her show last night after he took a swipe at her during his Fox News town hall on Sunday evening.

It all started when Buttigieg told Chris Wallace that he had to give it serious thought before agreeing to appear on the conservative news network.

“You know a lot of folks in my party were critical of me even doing this with Fox News,” Mayor Pete said, “and I get where that’s coming from, especially when you see what goes on with some of the opinion hosts on this network.”

“I mean, when you got Tucker Carlson saying that immigrants make American dirty. When you got Laura Ingraham comparing detention centers with children in cages to summer camps—summer camps—then there is a reason why anyone has to swallow hard and think twice before participating in this media ecosystem.”

Not surprisingly, Ingraham didn’t take well to being criticized.

“Beyond his Boy Scout demeanor and Mayor Pete shtick, Buttigieg is but another creation of a media apparatus desperate to oust Trump,” she snarled on Monday’s show. “And as I’m sure you saw again and again on the other networks, he showed this unattractive strain last night.”

Without any sense of irony, the Trump supporter continued, “But it is hard to patronize and condescend your way to win the nomination. You can’t do it. You’ve got to treat the people like they deserve to be treated.”

“Forget Mayor Pete, maybe we should call him Pope Pete. Because don’t you love how because he attends church, we are supposed to treat him like the be-all and end-all moral authority, or the arbiter or of who is and who is not operating in good faith.”

Ingraham concluded by saying, “I think we need a papal proclamation. This eager beaver mayor has perfected the art of mild-mannered extremism,” before going off on some bizarre tangent about how Buttigieg gives aide to “the modern day Taliban” and then Pete’s his father a Marxist.

Things took an interesting turn when Igraham’s own brother, Curtis, who happens to be gay, got involved, praising Mayor Pete for calling out his sister’s bigotry.