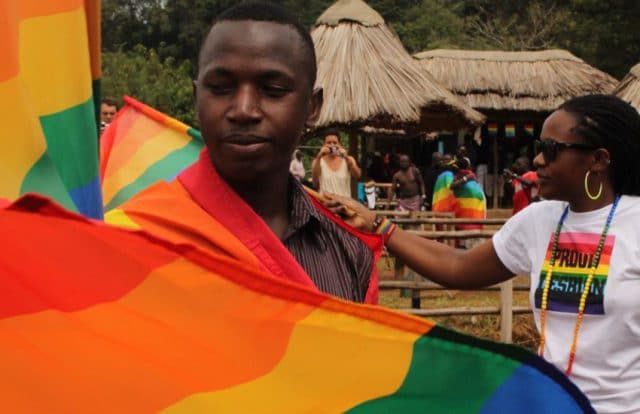 In what was a major blow for the community, the High Court voted to Sections 162 and 165 of the Penal Code.

Lady Justice Aburili, Justice Mativo and Justice Mwita handed down their ruling at the court in Nairobi. They ruled unanimously to uphold the laws.

One can still be sentenced to up to 14 years for violating the law.

‘The NGLHRC has seen time and time again how these old colonial laws lead to the LGBT community suffering violence, blackmail, harassment and torture. They devastate people’s lives and have no place in a democratic Kenyan society,’ Njeri Gateru said.

Gateru is the Executive Director of Kenyan National Gay and Lesbian Human Rights Commission (NGLHRC) and the main petitioner in the case.

‘All Kenyan citizens are guaranteed freedom from discrimination, equality and to be treated with dignity under our Constitution. Yet in handing down this most disappointing judgment, the Court has ruled that a certain sector of our society is not deserving of those rights,’ he continued.

‘Our Constitution, the supreme and homemade law of our land, should be respected and upheld as sacrosanct. The Court has missed an opportunity to help ensure a future free from the intrusion of the state in our private lives, and to turn the tide
for the LGBT community here at home in Kenya, and on the wider African continent.’

Twitter is brimming with frustration at the decision to keep consensual gay sex illegal.

‘In the week that Kenya lost an amazing LGBT activist, it was a lost opportunity,’ they also wrote.

Earlier this week, Kenyan LGBTI activist died at the age of 48. His work was crucial to help create tolerance for the LGBTI community in his home country.

‘What a very sad day,’ another wrote.

‘My heart goes out to the people of Kenya, whose high court today stumbled on the road to human rights for all, upholding a discriminatory, colonial-era law used to persecute gay people,’ activist Evan Wolfson wrote.

‘It is time to end all anti-LGBT oppression and affirm love throughout all of Africa.’

‘A sad day for Kenyan LGBT – but also for the future of Kenya as a whole LGBT across the world, please consider donating to the appeal! Until all of us are free, none of us really are,’ human rights advocate Andy Legon tweeted.

While anger and sadness are the most common reactions among LGBTI and allies in Kenya, others still hope in what lies ahead.

‘It is okay to have hopes,’ a Kenyan lawyer wrote to comfort a demotivated Twitter user.

‘Rome wasn’t built in a day. A sure thing is this is inevitable. At some point the law has to reflect the composition and desires of the society. And Kenya is, albeit slowly, becoming aware of the diversity within it.’