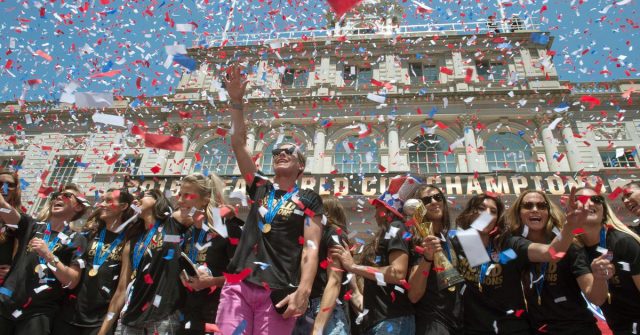 We realize our roster may differ from yours, and we welcome your comments, contributions and critiques. We read them all! Details on how to reach us are below, after our look at the week’s winners and losers.

Winners: The USWNT, Megan Rapinoe and Out LGBTQ Athletes

Megan Rapinoe and Rose Lavelle scored a goal each to hold onto their crown last Sunday, defeating a formidable Netherlands team 2-0 and securing America’s fourth Women’s World Cup championship. The win makes the U.S. the first team to win back-to-back Women’s World Cup titles since Germany did so in 2003 and 2007. New York City honored the women with a ticker tape parade in Manhattan’s Canyon of Heroes on Wednesday. The match was the second to feature two female managers in a Women’s World Cup final: American manager and out lesbian Jill Ellis and The Netherlands’ Sarina Wiegman. The match pitted the two teams with the most LGBTQ representation in the World Cup field. At the ESPY awards in Los Angeles, the women were honored with an award for best team and Alex Morgan won Best Female Athlete.

Loser: The homophobic vandal now being sought by the NYPD

The New York City Police Department has opened a hate crime investigation into the vandalism of subway ads for Nike featuring out lesbian Megan Rapinoe, the USWNT co-captain and World Cup MVP. The vandalism was discovered Monday night in the 42nd Street subway station beneath Bryant Park in Manhattan, according to the Hollywood Reporter. Someone scrawled the words “screw this ho” and “sheman” on her forehead on several posters. Eight posters were defaced with various “derogatory anti-sexual orientation comments,” NYPD Det. Sophia Mason told the Hollywood Reporter.

Two major league baseball teams signed on to an amicus brief calling for the Supreme Court to uphold workplace rights for LGBTQ citizens. The Tampa Bay Rays and the San Francisco Giants joined more than 200 major corporations in the brief, which petitions the high court to rule that current federal civil rights law prohibits discrimination in the workplace on the basis of sexual orientation and gender identity. Since employees can still be fired for being gay in 26 states (including Florida), such a ruling would obviously be a landmark victory for civil rights in America.

A male clinical psychologist from Ireland who writes for the conservative publication, The Federalist argued that the Women’s National Team actually outearned the men. “Yes, There Is A Soccer Pay Gap,” shouted the headline. “The Women Make More Than The Men Do.” He also claimed “men’s team sports are inherently more entertaining to watch than women’s,” but that’s an argument for another time. Let’s focus on the money for now. “Last year, the men’s World Cup in Russia generated more than $6 billion in revenue; the participating teams shared about $400 million,” wrote Dr. John Glynn. “That is less than 7 percent of overall revenue. Meanwhile, the 2019 Women’s World Cup made somewhere in the region of $131 million, doling out $30 million, well more than 20 percent of collected revenue, to the participating teams. It seems a pay gap does exist, after all.” The Washington Post Fact Checker, Meg Kelly, found that the French champions from the 2018 men’s world cup were awarded more than nine times more total prize money than the 2019 U.S. women’s tournament champs. “So there’s no question that there’s a huge gap in earning potential here,” wrote Kelly. “When the female players have appeared to make about the same or more money, they’ve had to turn in consistently outstanding performances on the world stage. Even with those feats, earning the same amount as the men’s soccer players was near-impossible under the previous collective-bargaining agreement. The new agreement has provisions that may reduce the difference in bonuses for friendly games and tournaments, but there is — without question and for whatever reasons — still a massive gap between men’s and women’s World Cup bonuses.”

At the recent Ultimate Fighting Championship (UFC) 239 event in Las Vegas, out UFC Women’s Bantamweight Champion Amanda Nunes became the highest paid fighter at the event after she TKO’d former champ, heterosexual Holly Holm, with a kick to the head and punches. “The Lioness” won the match within four minutes 10 seconds of the first round — Holm called it a “nightmare.” Nunes went home with the largest payday of the 23 other sluggers on the fight card. MMAfighting.com explains that salary figures released by the Nevada State Athletic Commission reveal Nunes earned $300,000 to show with an additional $200,00 for her win over Holm in the UFC 239 co-main event. Nunes then earned an another $50,000 for one of the ‘Performance of the Night’ bonuses, which brought her to $550,000 for her total payday. She won the Bantamweight title in July 2016 by defeating the heavily favored Miesha Tate, becoming the first gay grappler and first Brazilian woman ever to hold a UFC title. In January 2019, she became the first woman in UFC history to hold two championship belts when she knocked out Cris Cyborg to win the featherweight title.

Chris Kelley is an Ohio State Buckeye through and through and thrives being an out rugby player. Jim Buzinski profiled him for our Being Out feature, which looks at LGBTQ people in sports who have come out since Outsports first published in 1999.

Chris Kelley has come a long way as a gay athlete. He grew up loving sports, lettering in high school in basketball, football and soccer while being all-conference and all-district in baseball. But he dropped out of his first college where he was playing baseball because of personal struggles with coming out and not ready to be an out athlete. Raised in a very conservative and religious family in Columbus, Ohio, he did not have the support system to help him deal with accepting his sexuality. Kelley enlisted in the U.S. Army as a Specialist and after three years enrolled at Ohio State, where he has played rugby on the men’s club 7’s and 15’s teams. Injuries derailed his most recent season — and maybe his rugby career — but in his first two seasons he helped the Buckeyes reach the Big Ten championship game both times. And he did it all as an openly gay athlete.