MOUNT PLEASANT, Wis. (Reuters) – Kim Mahoney listened from her reclining living room couch as Democratic presidential candidates debated economic, trade and environmental policies this week, needing only to look to her backyard to see how lofty political pledges can really play out.

Once a middle-of-the-road Democratic voter, the 50-year-old paralegal lives in the last house standing in a neighborhood razed for a planned technology plant.

President Donald Trump and his fellow Republicans have touted the project for promising to create 13,000 jobs in Wisconsin’s Racine County, a pivotal area in a state considered a battleground in U.S. presidential races. Trump unexpectedly won Wisconsin in 2016.

Skeptical of a plant and jobs slow to materialize, Mahoney’s experiences have fueled her interest in the sweeping government reforms endorsed by her party’s ascendant left wing. She now embraces government-run healthcare and immigration leniency.

“What conservatives are doing is hurting people,” Mahoney said, explaining that as a “rules-follower” she once struggled with immigration amnesty but now recoils from Trump’s hardline policies. “When you have government not following the rules too, I’m just going to side more for human decency.”

She dismissed U.S. Senator Bernie Sanders’ “crazy hair, crazy left ideas” during his unsuccessful bid for the 2016 Democratic presidential nomination won by Hillary Clinton. Yet this week, he topped her list of preferred candidates as he fended off more moderate candidates’ attacks on his proposals.

U.S. Senator Elizabeth Warren also impressed her as genuinely concerned about helping people. Mahoney said she would gladly give up her costly employer-provided insurance and pay higher taxes for guaranteed medical coverage under the “Medicare for All” government-run healthcare plan backed by Warren and Sanders.

“Oh my gosh, he’s a Republican,” she said to her television as the Democratic race’s front-runner, former Vice President Joe Biden, argued that some Americans wanted to keep their current private health insurance.

Democrats across the United States have lurched left in recent years, increasingly favoring a broader government role in healthcare, stronger gun restrictions and blaming humans for climate change, Reuters/Ipsos polling shows. As Trump transformed the Republican Party with a crackdown on legal and illegal immigration, Democrats have grown more strongly opposed to his demands for a wall along the U.S.-Mexican border.

Sitting on her couch alongside her dozing husband and the family dog – a goldendoodle named Cocoa – Mahoney said ultimately she would vote for “anybody but Trump” in the November 2020 election.

Her 13-year-old daughter Reese briefly showed interest in the debate and asked her mother to explain the difference between Democrats and Republicans.

“I believe more in socialist values and protecting the environment,” Mahoney said. “They want to …”

‘EIGHTH WONDER OF THE WORLD’

Mahoney’s politics have shifted in the two years since her American dream was upended by an alternative Republican version.

In 2017, she and her husband were settling into a new two-bedroom, two-bathroom house when state and local officials announced plans to transform the mostly farmland around her small subdivision into a $10 billion technology plant – the largest planned-from-scratch investment by a foreign-based company in U.S. history.

At last year’s groundbreaking, Trump described the project involving Taiwanese company Foxconn as “the eighth wonder of the world.”

In exchange for about $4 billion in state and local incentive funding, Foxconn pledged to create 13,000 jobs paying on average $54,000 a year – more than the annual income of about half of the households in Racine County, according to U.S. census data.

Mahoney, embarrassed that she once voted for the Republican governor who secured the deal, said she learned about “good and bad guys” as she fought the government takeover of her home.

Affected homeowners were offered 140 percent of fair market value for the properties, according to a representative for the Village of Mount Pleasant. Mahoney’s neighbors all left.

Mahoney stayed put, questioning the legal process used. She said her offer fell short of the true cost to replace her home with quartz countertops and a custom-designed stone fireplace surround.

Her house now sits alone at the edge of Foxconn’s construction. Still willing to move for the right price, the Mahoneys nonetheless this summer planted two types of cucumbers in a garden and a row of fast-growing willow trees.

The project next door is a moving target. Foxconn has shifted plans and now expects a smaller-scale facility to begin producing “LCD screens for use in a variety of product applications” in late 2020, the company said in a statement.

Although the company has said it remains committed to its 13,000 jobs target, it fell short of its first-year employment goals, hiring only two-thirds of the 260 required jobs and failing to qualify for a round of state incentive funding.

“They’re trying to string us along until the election,” said Mahoney, concerned that the company may pull out if Trump loses.

She wanted to warn Democrats talking about jobs this week to be careful about the companies they engage. She rejected the argument that centrist candidates were more electable, even in states as critical as hers for Democrats to win back the White House next year.

Before Trump won Wisconsin in 2016, Democrats had prevailed in the state in every presidential election since 1988.

Mahoney voted for Clinton over Trump in 2016. In her view, Trump’s ardent supporters will never abandon him, while she hopes voters on the fence find him offensive enough to support any Democratic presidential nominee. 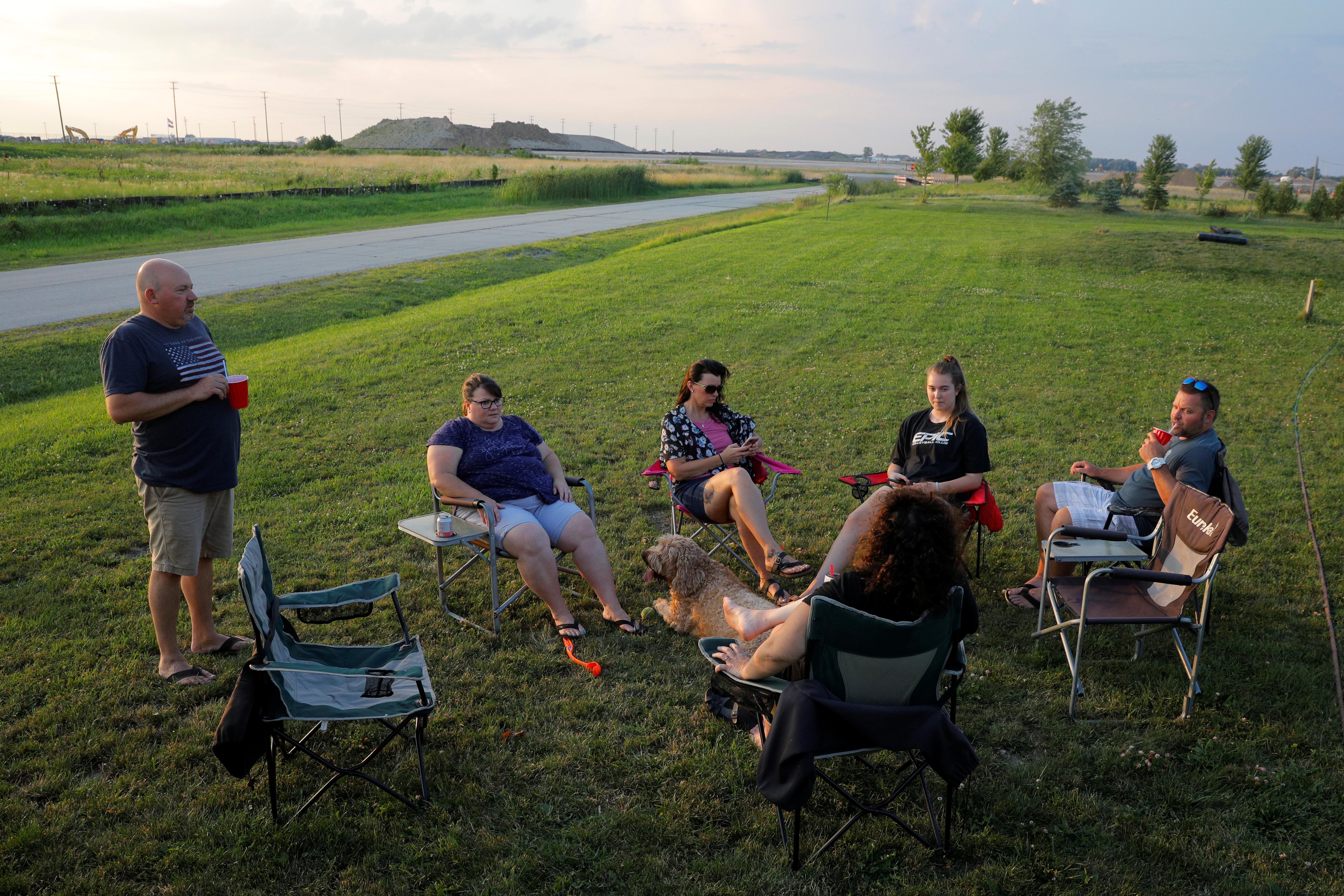 The more than five hours of debate in nearby Michigan on Tuesday and Wednesday only affirmed her favorites in the field, who include Mayor Pete Buttigieg of South Bend, Indiana, for his rhetoric and honesty.

While she still disapproved of Sanders’ unruly hair, the consistency of his anti-corporate messaging resonated with her.

“He’s looking out for the American people. He’s not looking to line his pockets,” she said. “That’s my theme.”