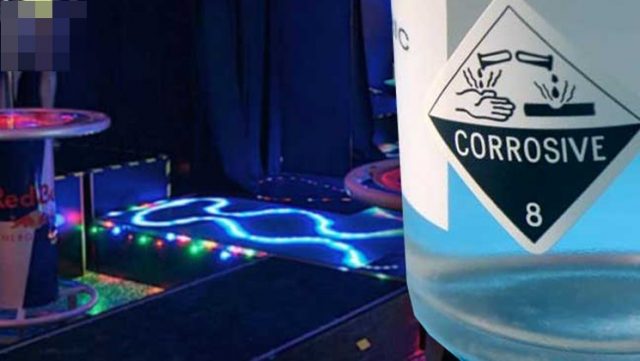 Last August, Hengky Irawan snuck into Aarows, a gay sauna in Sydney, with a liter of acid, a funnel, and a knife. He then proceeded to fill up a lube dispenser with hydrochloric acid, a highly corrosive substance that can cause severe burns to skin, eyes, and the mucous membrane.

Luckily, the lube dispenser was equipped with a sensor that alerted staff it had been tampered with, so nobody was injured. Irawan was arrested and charged with administering poison with the intent to cause injury, distress or pain and malicious damage.

This week, 62-year-old Irawan appeared in the Parramatta Local Court, where his lawyer submitted letters from a general practitioner and a psychologist, both alleging that he suffered from mental illness and that the act was an “irrational, uncharacteristic episode.” His lawyer then asked his client be spared any jail time.

But prosecutor Nathan Blatch wasn’t so keen on that idea, telling the court it was a “textbook example of motivation for hatred of people.”

“[He] knows it to be a place where sexual intercourse takes place,” Blatch argued.

Irawan’s responded by saying his client didn’t hate gay people. Rather, he was upset because he felt excluded by them during a previous visit to the sauna.

After listening to both sides of the argument, Magistrate Beverley Schurr sentenced Irawan to two years of good behavior bond, which is basically the Australian equivalent to probation.

In explaining the lenient sentence, Schurr said there was no evidence Irawan’s actions actually hurt anyone (though she admitted they could have) then said she sympathized with his feeling excluded by other sauna goers.

“It was directed towards patrons at the nightclub because he felt aggrieved about being kicked out earlier in the year,” she said. “Not about their sexual orientation … angry about being excluded himself.”