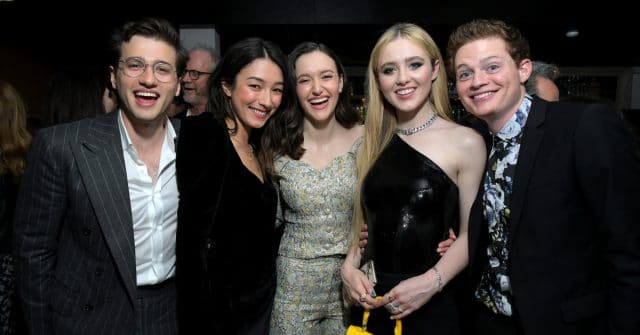 A deaf and gay teenager in the new Netflix teen drama The Society has been given a love story by the show’s creators.

Sam, played by deaf actor Sean Berdy, has been using American Sign Language (ASL) to communicate throughout the first season of the show.

In the storyline between Sam and Grizz (Jack Mulher), tension has been slowly building as they’ve grown closer and Sam has been teaching Grizz sign language.

In one episode, Grizz asks Sam to teach him “one more phrase” in sign language.

“How do you say kiss me?” Grizz whispers to Sam.

The Society is a Lord of the Flies-themed show about a present-day crisis in a small town in New England, US. The parents of the town disappear, leaving the teenagers behind to fend for themselves.

The Society is directed by Marc Webb (500 Days of Summer) and was written by Christopher Keyser (Party of Five).

Berdy previously spent five seasons playing the teen heartthrob Emmett Bledsoe in the Freeform family drama Switched At Birth, which featured ASL in almost every scene and was the first TV programme to show entire scenes only in ASL.

In The Society, Sam explains that he can read lips, so sign language isn’t always used in his scenes.

Berdy, 25, told TIME magazinehow the rest of the cast learned ASL during filming.

He said, “They literally knew not one sign. We had an ASL coach on set who was responsible for teaching the lines in sign language to the cast.”

“They had to have lessons during their free time and sometimes had to work extra over the weekends. I’m so proud of the cast — it’s not easy and they’re doing a great job on the show,” Berdy said.

The increasing representation of deaf characters has also been seen on the big screen recently. Chella Man, a deaf and trans actor, is set to join the second season of DC Universe’s live-action series Titans in the role of Joseph Wilson, aka Jericho.