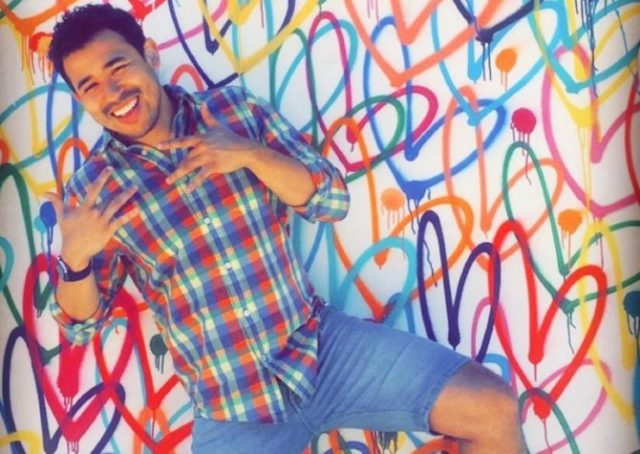 “I face a lot of interesting challenges,” he tells Queerty in an exclusive interview. “At times, I do feel invisible, which can be frustrating. At the same time, it drives me more and gives me a stronger voice (or hands) as an actor-filmmaker.”

Hearts is a busy guy. He just finished shooting a guest spot on a show. He’s also hard at work on a pitch for a new web series. All that is in addition to regularly going on auditions, taking acting classes, and working on short film projects.

Luckily, he had a few minutes to chat with us about his experiences as a gay deaf man of color, the L.A. dating scene, and whether he prefers Grindr or Scruff. Check out what he had to say…

QUEERTY: You’re basically a triple minority. Gay, deaf, and a person of color. What’s that like?

HEARTS: I face a lot of interesting challenges. The biggest would be access to opportunities–an audition for a leading role, a job interview, things like that. I’m not fully considered just because of my deafness. It’s funny because I look “normal” and my deafness isn’t visible until I start gesturing with my hands. Then people are like, “Ohhhh, you’re deaf.” I also know I miss out on opportunities just because I’m a person of color, or because I’m openly gay, or both. It’s very real and, at times, I do feel invisible, which can be frustrating.

Yet despite all that, you’ve still found a way to do what you love, which is filmmaking. In fact, your short film “Passengers” earned you the Best Filmmaker title at the Disability Film Challenge last year. Where did you get the idea for the project?

I actually used to drive for Lyft for extra money and I somehow came across the 48-Hour Film Challenge, where, like it says, you have 48 hours to complete a short film. So, I decided, why not borrow from my own experiences? I also knew that I wanted to see my own kind of love story, which, of course, involves a deaf queer person as the hero.

The beginning of the film pokes fun at some of the more absurd things people have said to you about your disability. What’s the most ridiculous thing someone has ever said, and how did you respond?

“You’re deaf? …But how can you drive?” (While I was actually driving them home!) “How do you have sex?” “Are deaf people quiet during sex?” Those are some of the dumbest questions I’ve been asked. Sometimes, I’d give them a “You’re kidding, right?” look. Usually I’d just smile and shrug it off. And, no, we are not quiet during sex.

On that note: Grindr or Scruff?


I’m more of a Scruff guy myself. (Sorry, Grindr!) I use it to, ahem, satisfy my needs and sometimes I actually use it as a way to get coffee or a drink with guys. While it’s a hookup app, it can be used to find potential suitors. This is where my person of color identity comes in first rather than my deafness. For hooking up, once we get past the obligatory “into?” talk and and we’re going to meet up, I let them know right there and then that I’m deaf. Most of the time they don’t care. They just wanna do it since sex doesn’t really involve talking anyway.

I’ve spoken with a few different disabled guys who have all said they deal with men fetishizing their disabilities. Have you ever experienced that?

Oh yeah. Oh yeaaaaaah. It’s very common. “I’m deaf. That cool?” “Dude, that’s so hot. F*** yes!” I’m just like, hey, whatever floats your boat, and if it tips it to my advantage, sure. For me, it’s more of how extreme the level of fetishizing the disability gets. So far, I haven’t felt the need to go “Dude, really? C’mon.” You have to understand, I’m a filmmaker, so I am always observing things like this. OK, and what about dating? Do guys treat you differently because of your disability?

What’s dating? Just kidding. I’ve gone on dates here and there, but it would never lead to anything past the first or second date. Dating is a whole ‘nother ball game, actually. I’m based in L.A. and Los Angeles is so different in those regards. First, you have the L.A. culture. Then you have the gay culture. And, to top it all off, the Hollywood culture. To have all of those three overlapping each other can make dating quite near impossible. Especially if you’re deaf and a person of color. Anything that differentiates from the “norm” (beautiful, able-bodied, hearing, and white) immediately makes you look undesirable or less than “perfect.” This is not to sound bitter or angry. This is just my observation.

That’s the next biggest issue in dating. I’m an ASL (American Sign Language) user. Honestly, I could write a book about this. Or rather a movie. Rom-com, right? Either way, it involves the non-signing person to learn sign language because how will we communicate if not that? Eternally typing back and forth on our iPhones? Nah. Also, the non-signing person would not just have to learn, but would also have to remain committed to a whole new language, one that’s visual and not spoken.

Have you ever dated another deaf guy?

I absolutely would. I just haven’t found the right one. For me, it doesn’t matter whether you’re deaf or hearing, as long as you can sign. Seriously, though, it can be a beautiful and more intimate journey for both the signing and non-signing dates. I’ve seen deaf/ hearing queer couples that started out like that. It gives my friends and I some hope!

What’s something you would like to tell others about guys with disabilities?

Don’t look past us. Get to know us. We’re just like everyone else, amazingly human and just another beautiful color in the big, great rainbow flag.