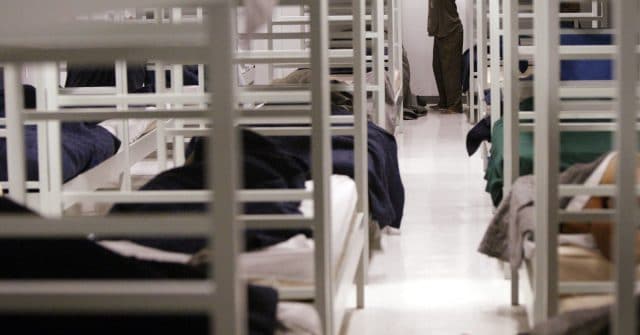 The Trump administration has proposed new rules to make it is legal to discriminate against homeless transgender people based on “religious beliefs.”

The revised rules issued by the Department of Housing and Urban Development on Wednesday (May 22) state that shelters are able to deny transgender people a place in the shelter of their chosen sex.

The policy states that shelter providers are permitted to restrict access to bathrooms or sex-segregated shelters to transgender people.

Under the proposed rules, shelter providers are entitled to assign sex based on “privacy, safety, practical concerns, religious beliefs, any relevant considerations under civil rights and nondiscrimination authorities [and] the individual’s sex as reflected in official government documents,” in addition to a person’s chosen gender.

The policy would grant religious homeless shelters the right to refuse gender-appropriate housing to transgender people.

Just one day before the proposed rules were issued, Housing and Urban Development Secretary Ben Carson had told Congress that he did not have any plans to change LGBT+ discrimination rules.

He had claimed: “I’m not going to say what we will do in the future about anything. I’m not currently anticipating changing the rule.”

Mara Keisling, Executive Director of the National Center for Transgender Equality, said: “This is a heartless attack on some of the most vulnerable people in our society.

“The programs impacted by this rule are life-saving for transgender people, particularly youth rejected by their families, and a lack of stable housing fuels the violence and abuse that takes the lives of many transgender people of color across the country.

“Secretary Carson’s actions are contrary to the mission of his Department and yet another example of tragic cruelty of this administration.”

Sharita Gruberg of American Progress tweeted: “The Equal Access Rule protects LGBTQ people from discrimination in housing, including in homeless shelters by ensuring transgender people are able to access HUD-funded shelter consistent with their gender identity.

“HUD wants to allow shelters to decide who is eligible for access to single-sex or sex-segregated facilities, opening the door to discrimination. Gender identity is the LAST consideration in its list of factors shelters will be able to rely on.”

Gruberg added: “HUD says shelters can consider safety/privacy, but it’s TRANS WOMEN who are most at risk. [The National Center for Transgender Equality] found >50% of survey respondents who stayed in a shelter in the prior year were verbally harassed, physical attacked, and/or sexually assaulted bc of their gender identity.

“In 2016, over 300 domestic violence and sexual violence organizations across the country signed a National Consensus Statement. These leaders agree: transgender women victims being served alongside other women is appropriate and not a safety issue.

“It’s important to remember, no matter what Ben Carson does, no matter how often he lies, LGBTQ people ARE currently protected under the law from housing discrimination.”