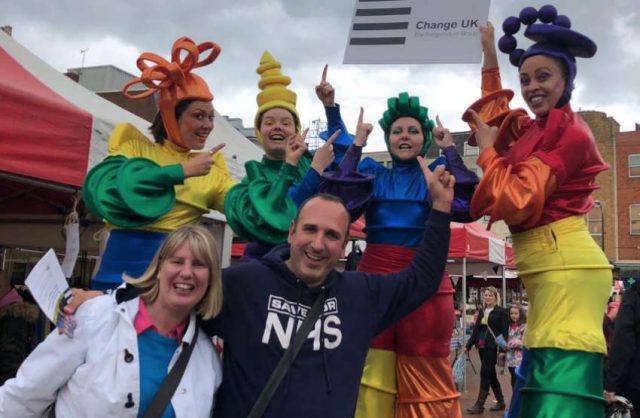 There was more than a fair share of Pride going around in Northampton over the weekend.

Hailed as a huge success by its organizers, Northampton’s second Pride’s main event took place Market Square on Saturday (18 May).

The overcast weather did not stop locals flocking to light up the town center with rainbow colors.

Alongside the main event, the day also consisted of a Pride park-run at the local racecourse and fashion show in the nearby Grosvenor shopping center.

One of the organizers, Councillor Anna King from Northampton Borough Council, described the day as ‘amazing’.

King highlighted the need for ‘increasing [the] visibility of [Northampton’s] LGBT community’. She added that the plan was to make the annual event ‘bigger and bigger’ every year.

Speaking to the BBC, attendee Samuel Shoesmith said the Pride event had brought a ‘real buzz’ to the city, and had brought everyone closer together.

‘The town was so busy, there were so many people walking around draped in the rainbow flags,’ he said.

Last year’s Pride event featured a video link up with Northampton in the US state of Massachusetts, as both cities were celebrating their Pride events on the same day.

The success of the Pride event will be a welcome sight for the East-Midland town’s LGBTI population.

The county of Northamptonshire has among the lowest LGBTI populations in the UK.

Only 0.4% of the population are openly LGBTI, according to a 2017 study by the Office for National Statistics. This is ranked alongside North Yorkshire and Staffordshire.

Northampton is situated about 60 miles north-east of the capital city, London. In contrast to its neighbor, London has one of the biggest LGBTI populations in the UK.