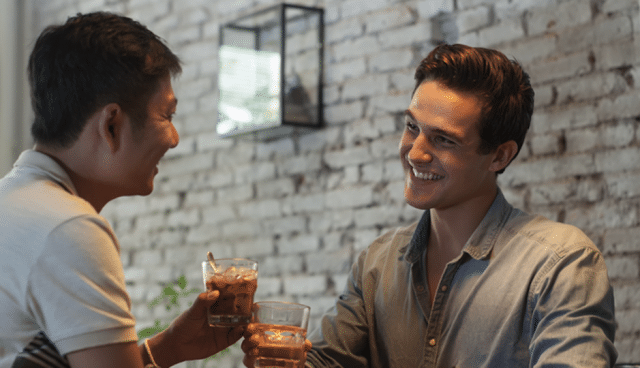 You are nowhere near as confused as I am

Let me clarify the context a little bit. I am a straight male. Not only that, but I have always considered gays as being something between twats and beta males. It is not that I hated them, it is just that I never took them seriously. I guess some thought of me being a homophobe, even though I never considered myself as falling into that category.

But that is irrelevant. What is relevant is what happened little over a week ago, when I stepped into a mess I still can’t see myself out of. You want the short story or the long story? Here, I can give you both. The short story is that I stumbled upon a gay guy’s cock. “Stumbled” as in “I kinda sucked it for a while”. Remember the “I am a straight male” part? Yea…

Now here is the long story.

I don’t have any gay friends. It is not that I don’t like them, but it is just that I didn’t have the chance of getting one. But I have a lot of straight friends and you probably know how things go when a bunch of lifetime friends get together on a Saturday night, with the sole purpose of getting wasted.

The big problem was not that we got wasted, but that we decided to follow the group’s clown into a gay club. I guess you can’t think straight anymore, when you have enough alcohol in your veins that could kill a horse. So we ended up in one famous gay bar in town, with little to no idea what was about to happen.

My brothers deserted me

I have to say, the place was like a battleground. Loud music, fog, bodies slamming into one another, screams and moans. It was, in some sense, some type of an out-of-this-world experience that quickly sucked me into its vortex.

About an hour in and I had already lost track of time, as well as any contact with the real world. I felt like I was floating. Next thing you know, I was talking to a tall, handsome dude, somewhere in his late 20s. No idea who he was, or what we were talking about. But then I remember kissing him. Or he kissed me, I don’t remember exactly. Fast forward 10 minutes and I was in the men’s bathroom, sucking his popsicle.

The day after was a calvary

I sucked a guy’s dick and I thoroughly enjoyed it. I can’t put it any simpler than that. Now, you may wonder, what’s going on through my head? Honestly, I don’t know what to think. As far as I am concerned, I still see myself as a straight guy. Who enjoyed sucking on a cock. I don’t know what to make of that.

What I am trying to say is…

That, for me, sexuality is not as simple as some make it out to be. I have definitely experienced that on my own and, I have to say, I am not disappointed with myself at all. Who knows, I might repeat the experience. After all, I have good memories about the last one, so why not?