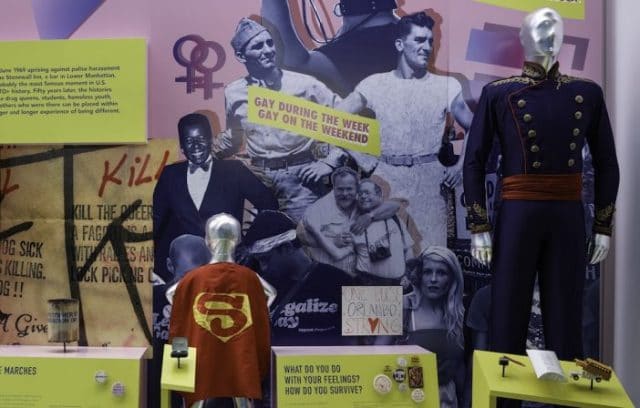 Among the dozens of items displayed in “Illegal to be You: Gay History Beyond Stonewall” — an exhibition case unveiled this month at the Smithsonian’s National Museum of American History in Washington, D.C. — are several items from our editor, longtime LGBTQ activist and journalist Bil Browning.

The items, donated by Browning and his longtime partner Jerame Davis, include a small paper gift box taken from a gay wedding, a bullhorn from Davis’ activist days in Indiana, and two buttons: one that reads “TELL” with a camouflage backing and another says “Trans Rights Now,” both of which came from political conferences.

The display also contains a personal item from Browning’s childhood: a small metal and plastic toy bus that used to bring him peace and empowerment as a bullied child. A broken latch made the bus’ metal hood detach from its plastic base, allowing Browning to re-imagine the bus as the snapping jaws of an alligator’s head. 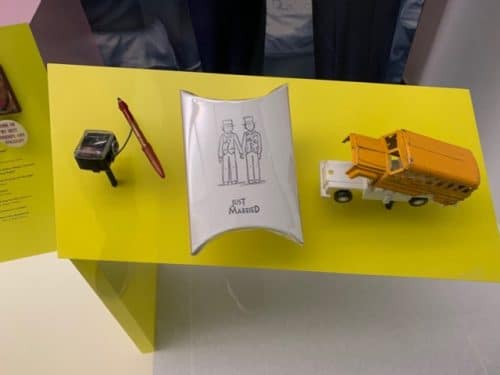 “In my daydreams, the bus would swallow my tormentors, gobbling down the pain they caused and spitting it back out, now neutralized, through its broken alligator jaws,” Browning explained.

Browning eventually became an HIV/AIDS activist, hitting the road with ACT UP to shadow Bill Clinton 1992 campaign trail. He went on to form Indiana’s only ACT UP chapter, executing dozens of direct action “zaps,” protests designed to embarrass high-profile figures while drawing attention to LGBTQ rights.

“I’d unknowingly learned another lesson from the bus-inspired fantasies of vanquishing the bullies,” Browning said. “If you want to succeed, if you want to move forward, you first have to open your mouth.”

Like Larry Kramer and many other queer trailblazers before him, Browning’s mouth helped define his career and re-shape gay culture nationwide.

Browning and Davis became the first people to win a sexual orientation-based discrimination case in Indiana. Browning was also the lead lobbyist to help Indianapolis pass a sexual orientation and gender inclusive human rights ordinance. He brought together a coalition of over 20 groups to pass the ordinance with bipartisan support despite it failing on a previous vote.

While working for the lobbying firm, Browning started Bilerico.com, a website covering Indiana LGBTQ issues and politics. Davis’ tech knowledge helped Browning and his friend Alex turn the site into the long-running political site The Bilerico Project. Among his many successes there, Browning’s articles helped bring national attention to the Salvation Army’s anti-LGBTQ policies. 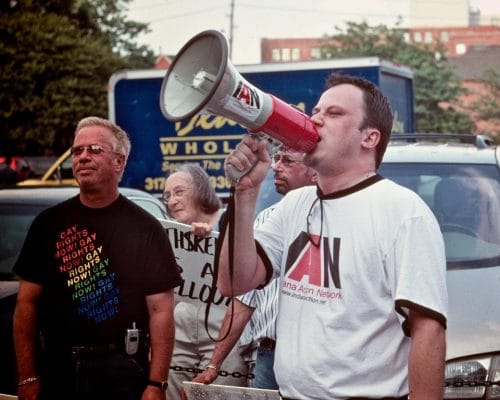 The bullhorn Browning and Davis donated was a tool of the Indiana Action Network (IAN), a direct action protest group that Davis led.

“The group was formed when we lived in Columbus, Indiana and the Cummins Engine Company announced they would offer domestic partner benefits,” Browning explains. “The right-wing quickly gathered for a prayer circle outside the company. We used our knowledge from the online zap to call for a counterprotest that was better attended.. It was the largest gathering of queers in state history at the time with hundreds coming to a park in Columbus just to be with each other. The bullhorn was first used at that gathering in the park. That gathering led to the first Indy Pride.”

The display case for “Illegal to be You: Gay History Beyond Stonewall” will remain up indefinitely. You can also find “The Bil Browning and Jerame Davis Papers ” online at the Smithsonian National Museum of American History Archives Center.