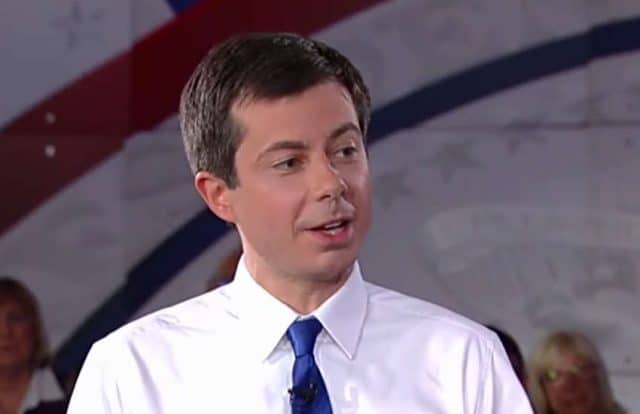 Pete Buttigieg and the other five leading Democratic presidential candidates would all beat Donald Trump in a general election, a poll has suggested.

Significantly, the openly gay candidate would be fourth most likely to win against Trump in a head-to-head election, tied to New Jersey Senator Cory Booker.

The poll, by and released on Tuesday (11 June), suggested that the pool of potential foes to Trump could be smaller than first thought.

Dozens of Democrats have catapulted themsevles into a cluttered field of presidential hopefuls. But the poll prominently suggested that the pool might be tighter than first thought.

Out of all the blue-tie lawmakers in the running, former Vice President Joe Biden proved the strongest. Between him and Trump, Biden was projected to win 53% of voters to Trump’s 40%.

Out of key voting demographic, Democrats had the biggest swing among female-identifying, Hispanic, and black Americans.

More than 80% of Black respondents said they would vote for the Democrat in the election, except for Buttigieg.

The 37-year-old Indiana mayor got 74% of Black voters. However, more said they wouldn’t vote or don’t know who they would vote for, if he were the candidate.

Hispanic voters were more likely to say they didn’t know who they would vote for when asked about lesser-known candidates.

Tim Malloy, assistant director of the Quinnipiac University Poll said: ‘It’s a long 17 months to Election Day, but Joe Biden is ahead by landslide proportions.’

‘That said, the Trump bump to 42 percent job approval is nothing to sniff at. It’s one point shy of the best Quinnipiac University survey number ever for President Trump,’ Malloy added.

Who is Pete Buttigieg?

The 37-year-old has arguably vaulted himself into a large – and growing – field of blue tie-wearing politicians all vying to take on President Donald Trump, 72.