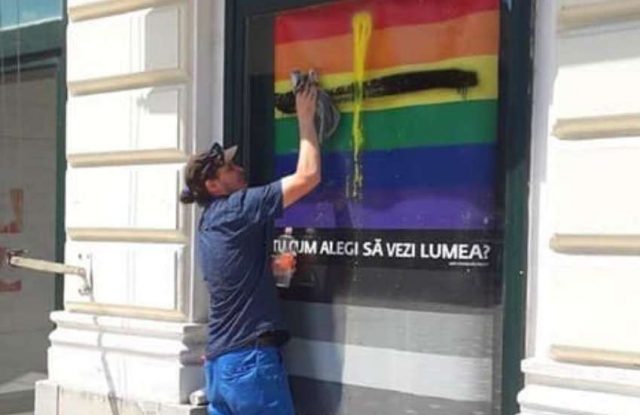 The LGBTI community in Romania’s second biggest city came up with the best way to deal with homophobic graffiti.

Timișoara in western Romania, . To avoid a negative reaction it bypassed a public parade. Instead organizers chose to focus on cultural events such as, theatre, music and art exhibitions.

The city’s beloved national theatre hosted one of the events and became the target of homophobes.

Last week, an unknown assailant painted a cross over the window. The window displayed a poster designed by the famous artist, Ovidiu Hrin, for the Pride event. After sharing it around their Facebook networks, someone went to wash it off.

Emilia Szuszmann helped organize the Pride festival and said they complained to police, who allegedly did nothing.

So, the assailant returned to paint another cross on Monday (10 June).

‘A few days later the cross appeared again, and someone from the Facebook community had the idea to make a rainbow out of it,’ she told Gay Star News.

So local artist, Benedek Levente, converted the cross into a vertical rainbow flag. He left a space for the message ‘how do you choose to see the world?’ to still be seen. 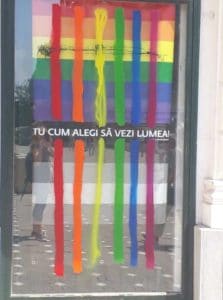 The beautiful solution to the homophobic graffiti | Photo: Facebook

Szuszmann wanted to put pressure on police to investigate the graffiti, but the majority of the LGBTI community decided to let it go.

‘But I don’t agree with that,’ she said.

‘What if next time a rock is thrown through the window instead, or something worse.’

The visibility of Romania’s LGBTI people increased last year after the influential Orthodox Church managed to convince lawmakers to hold a referendum on changing the constitution. Religious leaders wanted the constitution to define marriage as between a man and a woman, effectively ruling out any chance for marriage equality.

Other than the graffiti Timișoara Pride-goers faced protest from Orthodox priests who stood outside events, praying. A group of men also infiltrated an event wearing ‘Jesus is risen’ t-shirts.

Organizers also received threats of violence, affirming their decision to keep the visibility of Pride to a minimum for now.
‘We just don’t want to push it to, we just want to let the LGBTI public know there is a community here for them,’

They also want to make the city as safe as possible before becoming the European Capital of Culture for a year in 2021.

‘We need to offer a safe place for gay tourists,’ Szuszmann said.

Next up for Timișoara’s LGBTI community is to attend the other Pride events in Romania. They’re happening soon in the capital Bucharest and Cluj-Napoca.

Following that all the advocates across the country will come together to discuss what is next in the fight for LGBTI rights in Romania.

‘It is a very beautiful thing that happens, the people from Bucharest and Cluj-Napoca come to our Pride and we then go to theirs. Everyone pays out of their own pockets, it’s very nice to be so supportive,’ Szuszmann said.