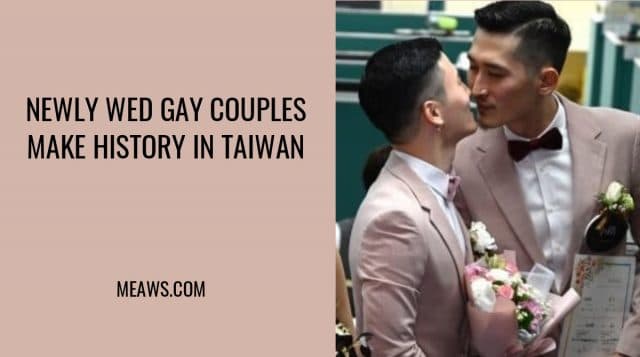 Today (May 24), hundreds of gay couples in Taiwan are celebrating their new marriages after the country became the first in Asia to legalise same-sex weddings.

Government offices opened at 8.30am TST this morning and gay couples were waiting to walk inside and, after a brief registration process, come out legally wed. Up to 150 couples were expected to wed in capital city Taipei alone, according to Jerome Taylor of AFP.

<p dir=«ltr» lang=«en» xml:lang=«en»>Congratulations to all the happy newlyweds in Taipei, and elsewhere in Taiwan. You made history today. pic.twitter.com/aDzkGM8CN5

The ceremonies come after a three-decade fight for same-sex marriage by campaigners in Taiwan.

Taiwan legislators voted for a government-backed bill on May 17 that defined a union between a same-sex couple as a marriage.

Shane Lin ©, partner Marc Yuan ® are one of the first couples to marry. (SAM YEH/AFP/Getty Images)

Chi Chia-wei (above) has been petitioning the Taiwanese government for almost 30 years to legalise same-sex marriage.

He was the first person to come out as openly gay in Taiwan in 1986 and has been behind several campaigns to legalise same-sex marriage.

Today, he urged others in Asian countries to take their battles for same-sex marriage to court.

In a referendum last November, 72 percent of Taiwan voted against same-sex marriage, showing the opposition towards LGBT+ rights that still persists in the region.

The referendum, which did not impact the supreme court decision to legalise same-sex marriage, favoured defining marriage as between a man and a woman.

However, the vote on May 17 was a momentous victory for Taiwan’s LGBT+ community.

Around 40,000 people took to the streets of Taipei to show support for the legalisation of same-sex marriage on May 17.